You're History by Lesley Chow 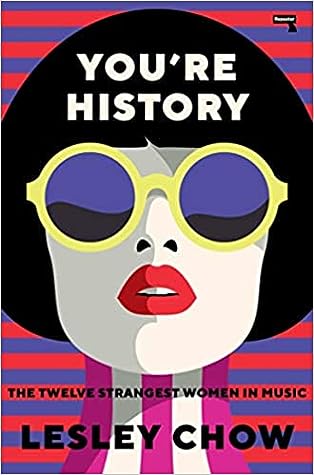 I bought this on impulse because it was a monthly deal on Kindle and I really enjoy reading essays about pop-culture. Disappointingly for me, this was less a biographical effort on some of the personal elements that made these female artists "strange," and more of a meditation on some of (what appear to be) the author's favorite bands and why she thinks every "ooh," "aaah," or "wah" is poetry, and how utterly avant garde it is to have a poppy song with *gasp* dark lyrics.

Like other people, I'm a little skeptical over the strangeness of the artists in here. I was expecting, I don't know, artists who were esoteric but influential, were involved in counter-culture, or had abrasive personalities that contributed to or sabotaged their art. To give you an idea of what I was expecting, I was thinking of artists like Bjork, Siouxsie Sioux, Natalia Sinclair, The Dresden Dolls, or Emilie Autumn. Instead, in this book, we get Taylor Swift (a very odd choice), TLC, Neneh Cherry, Sade, Kate Bush, Shakespears Sister, Janet Jackson, Rihanna, Azaelia Banks, Nicki Minaj, and a couple others I'm blanking on at the moment right now.

Chow is a very good writer and I think she really managed to convey her intensely deep enjoyment of music through her words. That said, her opinion is her opinion and unless you share her same passion for these artists or bands, I'm not sure you'll get much out of this book. There were only two artists in here I hadn't heard of before were  Neneh Cherry and Shakespears Sister, which, coincidentally, were the only two who delivered on the subversive factor for me. Conversely, there were only two artists in here that I really listen to consistently and those were Kate Bush and Sade. These four essays ended up being some of my faves because they were either telling me about someone new or validating a fave. I also ended up liking the Taylor Swift essay just because she's so inescapable, although the fact that Swift markets herself as a femme fatale in her music isn't exactly novel or strange.

My favorite thing about this book, though, is that it gifted me with the knowledge that Kim Basinger and Ozzy Osbourne did a duet with the band Was (Not Was), which, incidentally contributed the song "Walk the Dinosaur" to the Super Mario Bros. Movie soundtrack. #TheMoreYouKnow