Dim Sum of All Fears by Vivien Chien 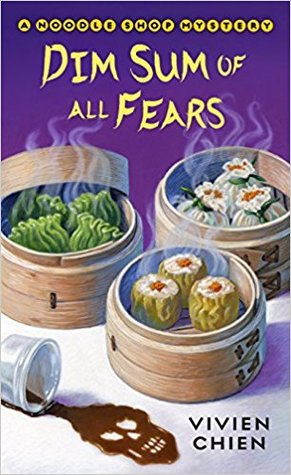 I've actually had this book on my Kindle for a while. I bought it not realizing that it was book #2 in a series. Book #1 went on sale pretty recently, so I decided to binge-read the two books, back to back. I don't think it's completely necessary to read book #1 first, but the books are chronological and have linear story-telling, and they do seem to build off one another, so I would not urge it, but I would recommend it.

DIM SUM OF ALL FEARS kicks off where the first book left off. After the last murder in Asia Village, the little shopping center in an Asian community in Ohio and the hub of many of their social events, society is gradually beginning to return to normalcy. Lana Lee is still seeing her new detective might-be-more-than-a-friend, and she's trying to get a job outside of her parents' restaurant. That's why, when her parents announce that they're going back to Taiwan for a stint to help out Lana's ailing grandmother, it really couldn't have come at a worse time.

Even worse; another murder happens. This time, it's personal. Lana's new close friend, Isabelle, is found murdered in the shop that she runs with her husband, Brandon. At first it seems like it might be a murder-suicide, but there are some details about the deaths that seem sketchy. Also, immediately after the event takes place, two women show up, both claiming to be Brandon's ex-wives. What on earth is going on? And which of them are telling the truth?

So this book was pretty good. I liked the raised emotional stakes and how this death felt especially personal since Mr. Feng was more of an uncle figure than a friend (he was closer to her parents). Lana takes Isabelle's death personally and it makes sense why she would want to get involved in the case despite probably having some lingering fears over her last close call. I don't think this mystery was plotted quite as well as the first one, though. I couldn't figure out who did it but I also felt like the details of the case were way messier, and I just wasn't as engaged in the mystery.

I think this is a really fun cozy mystery series but I was disappointed that food was less prominently featured in this book and there wasn't as much of the sense of community here that the first book had. I'd probably still read further in the series, but this book has a major case of second book syndrome.