Finding Freedom: Harry and Meghan and the Making of a Modern Royal Family by Omid Scobie 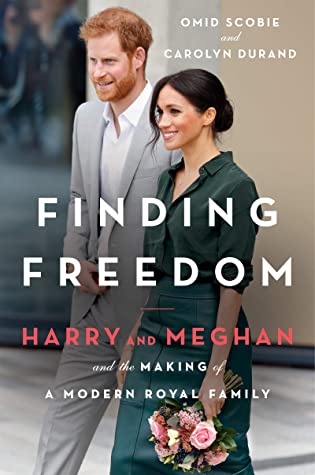 I read this after MEGHAN: A HOLLYWOOD PRINCESS. I actually recommend you do that, too, because AHP is a biography of Markle before her life with Harry, and this book basically takes over where the other book left off. They are both also written from the same sympathetic perspective, and the details sync up nicely.

I bought this book because of all the negative reviews for it on Goodreads or Amazon from people who seemed to be anti-Meghan. Honestly, the hate this woman gets astounds me-- especially compared to the other royals. If you think it's due to anything but racism and classism, I suggest you check out this BuzzFeed article by Ellie Hall comparing the coverage that Meghan gets compared to Kate from the same media outlets. If you ask me, I'd say that Markle is guilty of nothing but "princessing while Black."

Having read FINDING FREEDOM, I will say that it reads like a puff piece, but it's an engaging one, and a harmless one, IMO. If you hate Markle, it probably won't change your mind, but if you're neutral or positive, it's a pretty fascinating read. I liked reading about Markle's interactions with her famous friends (including the daughter of PM Mulroney, Serena Williams, and Eddie Redmayne), her passion for cruelty-free and local goods (one that I share), and her not-so-fairytale romance with the prince. I kept annoying my family with facts I thought were interesting.

I respected Markle before reading this and I still do, now. I can't imagine the pressure of being in the public eye the way she does and I'm glad that she and Harry were able to do what they needed to do for the sake of their respective mental healths (and those of their children).