She Memes Well by Quinta Brunson 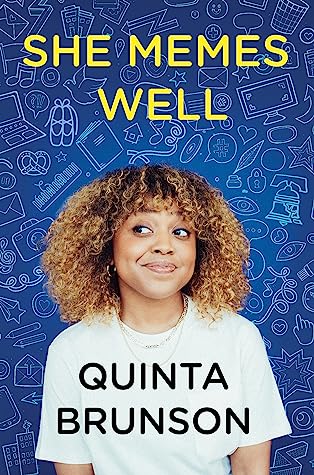 Even though it has its problems, I love BuzzFeed. I've been watching it for almost ten years and some of the recurring people on it almost feel like friends (even though they're totally not). I've even followed some of my faves onto different channels and platforms, like Safiya Nygaard or the Kitchen and Jorn Show. And if they write books, I totally buy them. So obviously this meant that when I found out that Quinta was releasing a book of her own, I was like YAAAAAASS.

Quinta's first BuzzFeed video was the International Doritos Taste Test, where apparently she was just a guest of Justin's (although she joined the team shortly after). This is just one of the facts you will learn about Quinta while reading this memoir. I also had no idea that she was internet famous even before BuzzFeed, because apparently she did a short comedy video called "He Got Money" from this sketch she did about a girl who's never been on a nice date.

SHE MEMES WELL touches on so many topics, and all of them work. You learn about her Jehova's Witness background, her thought on Black hair (and all the work that goes into it). She talks about working in the Apple store prior to doing comedy and how she ended up having to go back to the Apple store before finally making it big in comedy. She talks about not getting involved in internet drama and how it's hard being a woman and especially a woman of color on the internet. She talks about Black Lives Matter and how she had a cousin who was shot, which made her stakes in the movement extra extra personal. She talks about loving yourself and loving other people (be it romantic relationships or family) and about some of her favorite media that have inspired her, be it video games, books, music, or movies. I would honestly read an entire book where she just writes essays on her favorite movies, like Lindy West did with that one book S***, ACTUALLY.

After finishing this book, there really wasn't much else to say. I loved the randomly interspersed photographs, her outlook on life, and how she always tries to keep it real. I know a memoir is A+ if by the time I have finished reading it, I find myself wishing that the author was my friend. She was one of my favorite personalities on BuzzFeed and I'm glad she's doing well at staking it out solo, too.