The Education of Ivy Leavold by Sierra Simone 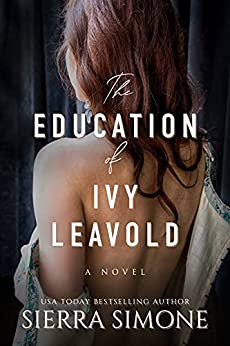 I decided to take advantage of being stuck in bed post-COVID vaccine booster by finishing up some of the half-finished books that have been languishing on my Kindle. Romance and thrillers are my happy places when I'm not feeling well, and THE EDUCATION OF IVY LEAVOLD is extra fun because of the gothic vibes and because Sierra Simone can really write a beautiful turn of phrase.

This book takes off exactly where the last one ended. Ivy and Mr. Markham are continuing their whirlwind romance and are now engaged, but the secrets of his dark past are still festering between them. He might have been responsible for the death of his two past wives and even though he's good at turning her crank, she's terrified that he might just snap her neck-- or worse.

The first book worked better for me because it was more about sexual tension, which I LOVE. And the Jane Eyre elements? Pure catnip. This was just nonstop banging. And the banging in question wasn't always sexy. Sometimes it was just lurid or gross. There's a bit of teacher kink in here and that is so not my thing (maybe it's because I used to tutor, and I'm just like EW), so every time he called her his pupil or referred to himself as her teacher, I kind of vommed in the back of my throat a little.

This is not a bad book-- and in some ways, it is actually a good book-- and I am curious where it goes from here. But it's also not a keeper, imo.