The Awakening of Ivy Leavold by Sierra Simone 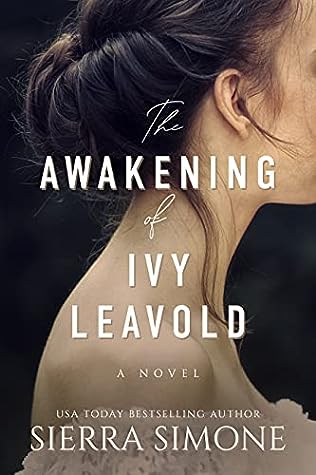 It is a truth universally acknowledged that three-star reviews are the absolute worst to write, which is why I typically use bullet points now, because it makes it so much easier (and more entertaining) to organize my thoughts. Sierra Simone is a beloved erotica author by many, but after reading and hating one of her books, I never picked up anything else by her for many years. Which maybe was not quite fair of me, as it seems like her books are actually quite different from one another in terms of content and tone. So when her books went cheap or free, I picked them up and told myself I'd give Ms. Simone the ol' college try.

👍 The Gothic setting. I really like how this book plays with a lot of the tropes in classic Gothic novels, not just in Rebecca and Jane Eyre, but also the pulpy ones that involve some woman in a frilly dress running away from a castle. Creepy servants, ominous warnings, dark histories, the threat of ruin? YAASS.
👍 The sexual tension. Considering that this is a pretty short book, the author did a good job stringing out the sexual tension and having some pretty steamy scenes that had the reader screaming "NOW KISS" (among other things). I also thought that Ivy and Julian had a lot of chemistry. Physically, anyway.
👍 The parlor "games." Enough said. If you know, you know. 😏
👍 Julian Markham. I just love a good gamma hero. And even though there was a bit too much of "stay way from me / I'm too dangerous / but also I can't help myself" a la Edward Cullen, I found him really compelling. Not all authors can strike that balance between compelling and dangerous, but I felt like this was a pretty good effort.

👎 Ivy doesn't have much of a personality. Her hobbies literally just involve sexy river bathing and lusting after the hero. We're told a lot about her, like the fact that she's independent and doesn't want to be a prisoner to a guy. Which, you know, hats off. But she also doesn't walk the walk, and a lot of her behavior comes across as incredibly unconventional at best, and completely anachronistic at worst.
👎 More backstory would have been nice. I never say this, but I think the book needed to be twice the length it actually was. I would have liked more info on Julian's two past wives, more scenery about the creepy house, some insight into what Ivy's life was like before her brother's passing, and, you know, maybe more of an emotional connection between her and the H. Especially given the ending.
👎 The feminism is mostly lip service to sexual agency. Ivy is very much pro sexual agency. Which is great. But, again, we don't really have the background for why she would feel this way, at this time, when a woman was only as good as her virtue. And she definitely loses her spine once she falls for Julian. She immediately starts trying to rationalize him as a love interest, despite the fact that he might have murdered his two wives, and thinks to herself, "Well, maybe my cousin provoked him." Wow, okay, Ivy. That's some bang-up feminism you've got there. Right on.
👎 Major cliffhanger ending. Which is fine, but I know that really bothers some people. This really doesn't work as a standalone because it's kind of written in the serialized format, where you read the books in installments. I think approaching this book that way will temper your expectations.

So, overall this was much better than the other book I read by this author. I liked the writing-- it was beautiful in parts-- and the story was fun, albeit flawed. I'll definitely be checking out more of her stuff.