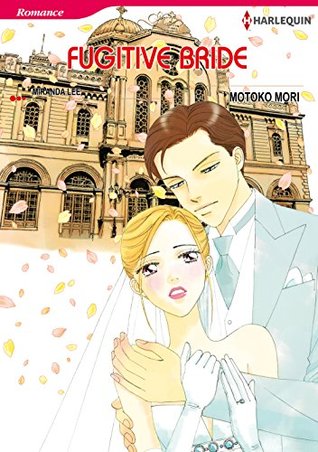 This manga is an adaptation of a Miranda Lee romance. It's one of three I've read today and I've already figured out that Lee was an author who liked to play with tropes. Sometimes it works out, like I read a cute Harvest Moon vibes one that took place on a farm. But then I read a really shit one about reproductive coercion (made romantic! Barf!), so by the time I got to FUGITIVE BRIDE, I was, shall we say... skeptical.

First, a warning: this review is going to contain spoilers because the twist is probably going to be triggering or annoying to some people. You have been warned.

Leah is on the run from her rich husband because she heard him talking to one of his underlings and he said he married her because he liked that she was a virgin because that meant that she was a tabula rasa for him to mold into his perfect wife. Being a sane person of rational mind, Leah nopes out of there and starts doing what she did before she met her husband, Gerard: working on boats.

One day, while on a boat headed to Indonesia, she sees a man who looks just like Gerard. But no, the man is Gareth, his twin. Gareth shows her a scar on his chest that Gerard didn't have and tells her a little bit more about their family. Gerard told her that his parents were dead, but apparently the mom is still alive. Their parents had a messy and abusive relationship where the dad kept accusing the mom of cheating and the dad ended up in a car accident after driving off in a rage at a failed attempt to confront her at her place of refuge.

At first, Leah is wary of Gareth but he seems like a totally different guy from Gerard. He's attentive to her emotions, he's not an arrogant asshole, and he seems to actually care about her as a person. He even saves her from a car when she's rage-walking into the street. All in all, Gareth seems like a bang-up guy and when she falls for him, Leah decides to return to Australia to confront her husband and demand a divorce...

BUT OH NO! GARETH IS ACTUALLY GERARD!

So apparently, Gerard had a car accident after being totally distraught over Leah's leaving and when his mother and her new husband came to his bedside, they hashed out the past and he realized that he was wrong to side with his father all these years, and that his mistreatment of his own wife stemmed from his fear of letting people in and being hurt. Leah is angry about being catfished (as one would), but Gerard's secretary takes it upon herself to force Leah to stay and hear him out WHICH I'M PRETTY SURE IS ABOVE HER PAY GRADE BUT OKAY.

Anyway, Leah is like NOPE BYE but Gerard hunts her down again-- on ANOTHER BOAT, and reproposes to her with a new ring and a bouquet of flowers. And... okay, it's an epic grovel. He doesn't blame her at all or try to excuse his actions. He apologizes for everything and tells her how in love with her he is and how his near-death experience changed his outlook and all that good stuff. SOOOO I decided that even though I hate catfishing, I was like... I'll allow this.