Every Single Secret by Emily Carpenter 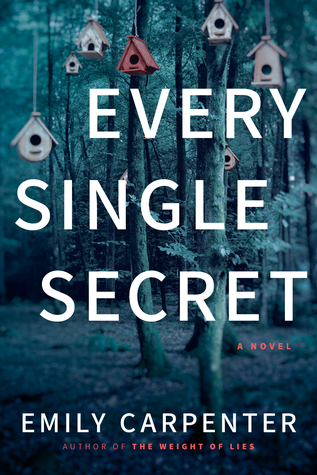 I just got my COVID booster and it made me feel pretty sick, so after sleeping for most of the day, I finally feel well enough to sit up and read. And what did I sit up and read? This book I'm buddy-reading with my friend, Heather: EVERY SINGLE SECRET.

Daphne and Heath are two professionals who met at a summit and ended up finding love. But both of them are extremely damaged individuals behind their polished veneers. Glossing over their pasts has worked for them in the past, but now Heath wants to take the next step in their relationship by going to a couple's retreat called "Baskens" run by a meritorious psychologist and confronting the demons of his past.

Daphne agrees to go as long as she doesn't have to talk therapy, but right away, it's clear that something is off. They aren't allowed to talk to the two other couples there; their phones are taken away upon arrival and there's no Wi-Fi, and they're basically being monitored in the common rooms of their suite. You know, for therapy.

As things get steadily more creepy, Daphne ends up unwillingly confronting her path after all, which makes her afraid of two things-- what if Heath doesn't love her anymore once he finds out the terrible things that she's done? And what if Heath has been through worse?

So EVERY SINGLE SECRET was amazing. It has so many tropes I absolutely adore in thrillers: a psychology angle (psych major here!), fucked-up childhoods, toxic relationships, potentially dangerous but still-hot guys, and a heroine... who wears glasses! This is so exciting for me, as someone who wears glasses, and I know that was something Heather called out in her review too. Also exciting for me was the way that it was written so I was never 100% sure what was going on until the very end. I had so many theories, though! I'll definitely be reading more from this author and I think it will appeal to people who liked mysteries like NEVER SAW ME COMING and WATCH THE GIRLS.