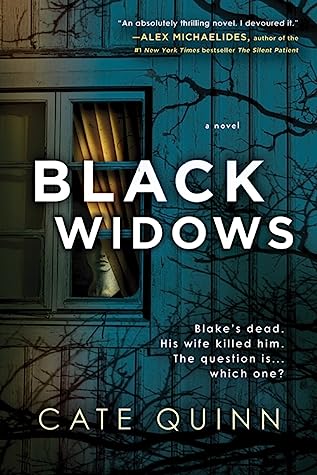 So I have way too many books and not enough time to read as much as I want. That's why one of my 2022 reading goals was to be way more ruthless with by book collection. I'll probably write more DNF reviews, not less, because I don't think there's any honor in wasting our precious time here on earth forcing ourselves to read bad books. I'm also going to try to read the most exciting books first, which is why I've been reading so many MYSTERIES. <3

BLACK WIDOWS was a book I've been excited to read for a while because based on the summary, it sounded like it had a lot of tropes that would be right up my alley: bad childhoods, family secrets, cult shenanigans, and murder. Um, yes? I didn't even care that it was multi-POV (not a narrative style I usually like) because each of the three wives were all so distinct and interesting in their own way.

The story is basically this. Blake, the most boring husband ever, dies pretty brutally. As it turns out, he's an FLDS Mormon and a polygamist, and he has three wives. There's Rachel, the first wife and the most traditional. There's Emily, the waifish crazy young wife who doesn't like to be touched. And then there's Tina, the wild Vegas wife, and the odd one out among the other two. As they are interviewed by the police, we get to know each of these three women and their secrets, which involve sexual dysfunction and an even scarier cult, while wondering which if the three-- if any of them-- did it.

BLACK WIDOWS started off really well. It also had some pretty interesting points in the middle, like flashbacks to a terrifying cult facility and a trip to Vegas that starts out as a quest to get information but basically turns into, well, you know: a trip to Vegas. It was a lot longer than it should have been, though, I think. This book had over one hundred chapters in it and I'm not sure everything was necessary. I do think the author did a really good job setting up the creepy premise, though, and there's not even that much bloodshed. Most of the mystery is in the characters' unreliable little heads.

I would read more from Cate Quinn. For a debut, this is pretty good and even though it has the usual first book jitters, I still thought it was really fun to read.