The Dark Duke by Kinuko Nakayama 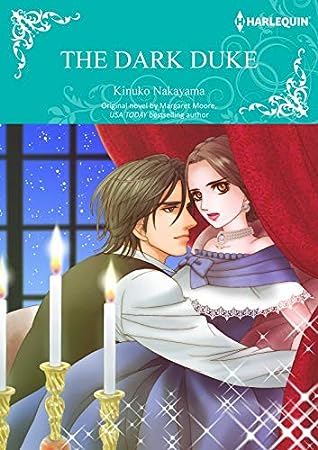 THE DARK DUKE is a manga adaptation of a Harlequin historical romance by Margaret Moore. I haven't read many manga adaptations of books by authors I've actually read in paperback, so this was a treat. I really like Moore's books. They're typically pretty light and fluffy, but there's usually enough tension and drama to keep them from being boring (always a risk for me with the fluffy ones).

The heroine of this book is a "plain" woman named Hester who is the companion to a spoiled Marquise who likes to play cards and boss people around. One day, the two sons-- her stepson, Adrian, and her biological son, Elliott-- return to the property. Adrian is known as the Dark Duke: a ruthless playboy and a wastrel. Elliott, on the other hand, is gregarious and charming. He seems like the obvious choice but for some reason, Hester is drawn to Adrian.

I actually really liked the hero in this book. He's a little tortured and there's a bit of a Mr. Darcy thing going on with how his attraction and awkwardness make him say and do all the wrong things. There's a scene when he confesses why he is the way he is that was so heartwrenching. I honestly felt so bad for him. And the grovel/confession at the end! LOVE.

I'm giving this a three because it took a while to get off the ground and there's an attempted rape that's basically just glossed over with no real consequences (not by the hero). I also found it annoying that the so-called "plain" heroine was drawn to look classically beautiful. Whether it's "pretty-washing" the characters or playing into the "she's beautiful because she doesn't know it" trope, it's kind of gross.

Apart from that, I had a good time.