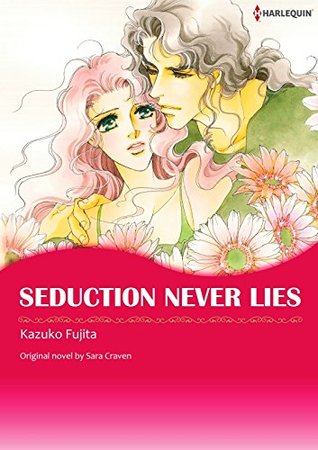 This is an adaptation of a Sara Craven romance novel by the same name. Craven was one of the big names in the Harlequin Presents books, and I'm delighted that so many of her books are being rereleased in this new, easily accessible format.

SEDUCTION NEVER LIES is a pretty cute rock star romance. Tavy (Olivia) is the daughter of a vicar in a small English village that is struggling to stay afloat. She's a virgin, too, and is dating this dude named Patrick who's already talking about marriage even though they never slept together. Before you can say "conflict of interest," she's also working for his mom, who runs the village school.

One day, Tavy is doing some nude bathing in a river (as one does), and finds out that a hot guy is watching her. It turns out, he's just bought the property and is a retired musician named Jago. This plot twist kind of reminded me of that old 80s YA romance, EASY CONNECTIONS, except, you know, no rape. Yay.

Anyway, drama happens. Tavy is attracted to Jago but wants to stay true to Patrick. Patrick, on the other hand, has no such qualms and is seeing Tavy's childhood friend-turned-frenemy Fiona, on the side. To make matters worse, it turns out that he was just pretending to be dating her because Fiona is going through a divorce and wants that extra coverage lest her husband's lawyers find out about her affair and it impact her settlement. To make matters worse-worse, Fiona has her eyes on Jago, too!

Except for the slight fetishization of the heroine's virginity, this is a pretty great romance. I normally really hate rock star romances with a passion but I thought it was touching how Jago was an artist at heart and how he left his music career after some soul-searching because the sex, drugs, n' rock n' roll lifestyle weren't giving him what he needed out of life. He was just a really swell guy, which is a rarity in old skool Harlequin romances like these, so I was touched.

Tavy is a bit too passive and woe-is-me for my liking, but she wasn't awful or TSTL either, which is a low bar, I know, but this is what desperation has driven me to and beggars can't be choosers. If you're into the whole Harlequin manga thing, you'll enjoy SEDUCTION NEVER LIES.