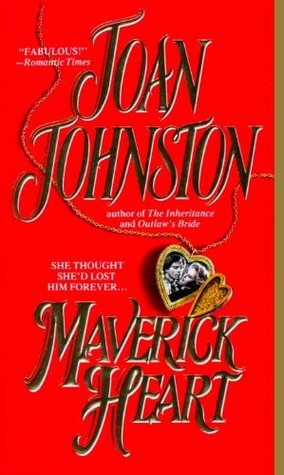 This is my first Joan Johnston historical romance and big ups to Heather for buddy-reading it with me. I recently featured this book on my Instagram because I thought the cover was cool. I feature a lot of vintage historical romances on my Instagram but I've gotten kind of lazy about reviewing them, so one of my 2022 reading goals is to plow through some of my old paperbacks and see which I want to keep and which I want to give away.

MAVERICK HEART starts off with a wicked bang. Verity is being forced to marry a psychopath named Chester (LOL). If she doesn't, Chester will murder the guy she really loves, a man named Miles. And she totally knows he's telling the truth because Chester already killed Miles's older brother. So she humiliates the love of the life, telling him that the scar on his face disgusts her, even as she's carrying his baby. SO MUCH DRAMA.

Eighteen or so years later, Verity is going to the Ol' West with her son and his would-be fiancee, Freddy. Chester was impoverished before his death, and all that was left was a deed to some ranch in Bumfuck, Montana (at least, I think it was Montana?). So off they go, but oh no! EVIL NATIVE AMERICANS. Faster than you can say "problematic content," Rand and Freddy are both carried off and Verity comes face to face with the man who managed to save her: but oh no, it's the man she betrayed: Miles.

As it turns out, Miles has been thinking about her all these years (YAAAASS) and planning his revenge (YAAAAASSSS). We learn that he was the one who ruined Chester and now, he'll do anything to make Verity his. She's forced to marry him, and then they do it, but things quickly sour. First, there's this gross subplot with Freddy and one of the Native guys, who rapily won't take no for an answer. She and Rand escape eventually, with the help of the Native guy's first wife, Willow, who doesn't want to be second best. When he gets back to Miles, Miles finds out that Rand is his son and becomes a total little bitch to Verity, treating her like a whore and basically angsting about why Rand doesn't love him.

At this point, I was mentally banging my head against the wall. I don't mind a vengeful obsessive hero, but nothing is a bigger turn off than a vengeful obsessive hero with incel-like tendencies. The way he uses Verity's past against her, even when she tells him the truth again and again, was infuriating. He knew what Chester was like. And then when he starts inserting himself between her and Rand and saying that he's going to tell his son The Truth and maybe he won't let her be present when he calls her a slutty mcslutterson to the boy she raised (despite her spineless pleas) I got really grossed out.

Also, there's another gross Freddy subplot where she's raped by a cowboy and then the Native guy and Rand fight over her again while she insists that she's damaged goods. Hooray.

I'm giving this a 2.5 rating because even though it pissed me off, I wanted to find out what happened and I'm also feeling generous right now. I'm a sucker for Western romances-- I don't know, it just brings out the yippie-ki-yay in me. And if you like a bit of yeehaw in your historicals, this is your jam. Especially if you don't mind some gaslighting douchery and un-PC content.