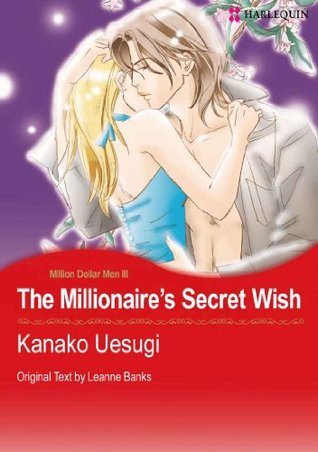 Oh my Gosh, what an annoying book. Here's the thing about these Harlequin manga, okay? Even if the mangaka does an amazing job, the story is only as good as the source material. I bought this book a while ago when it went on sale even though I'm not keen on second chance romances or millionaire romances because I am keen on manga and sales, and I thought the two states of affairs would cancel each other out. Foolish me, I know.

The story, at first, is simple and even a little cute, albeit bland. Dylan, the hero, is the last singleton in the "Millionaire's Club," a trio of guys-- Dylan, Justin, Michael-- who grew up in an orphanage and ended up making it big. Now they casually laugh in their millionaire mansions about their good fortunes while telling themselves they deserve it because they casually throw a bit of charity out there every year or so as a tax dodge. No, this is never explicitly stated but come on. Anyone who gloats about being a millionaire and starts a little club over it isn't holding onto all that cashola for charity. Let's be real, here.

Anyway, the hero gets a phone call and FREAKS OUT because Alisa, his childhood love, has been in an accident. Good news, she's not dead. Bad news, she's received a highly rare form of selective amnesia that has somehow only made her forget the hero and NOTHING ELSE. Dylan is like whoopee I'll take her home to heal and maybe she'll forget why she hates me. SECOND CHANCE WOOHOO. If you think this is a little bit creepy, you're not the only one. If he didn't have taut abs, this would be serious r/neckbeards behavior. I wouldn't be surprised if he had a secret waifu pillow with her face taped on it. ANYWAY.

Because this is a romance novel and not a horror novel, Alisa is like lalala I LOVE HIM MAYBE. But oh no, when she sees another woman flirting with him at this gala he drags her to as part of her rehabilitation (lolwut), SHE GETS A FLASHBACK. Dylan was a womanizer and totally hooked up with another woman right in front of her! THE SADNESS! Obviously, this means she has to get the heck out of Dodge (as in Dodged-that-bullet) and think about what this means for her relationship.

But then she has a conversation with her mom and finds out that her mom was actually the reason why they broke up. AND THIS IS ONE OF THE REASONS THIS BOOK IS GETTING A ONE. The mom was the cafeteria lady at the orphanage or w/e and reveals that when they were little high school lovebirds, the mom kept them from running away together and even THREATENED HER DAUGHTER'S LIFE, implying that she'd rather see her dead than with Dylan. WHAT> And then when they were in college she literally told him "even being a scholarship orphan won't get you the same opportunities as someone two REAL parents." ARE YOU KIDDING ME? Why are you working at an orphanage if you hate orphans so much? And do you also kick puppies and kittens in your free time?

Anyway, Alisa listens to all this and HUGS HER MOM and is like "Omg, I'm sorry I made life so hard for you." WHAT????? DID WE JUST LISTEN TO THE SAME CONFESSIONAL? I was screaming internally at this point, wondering how someone could possibly be this ridiculous.

Regarding the art, it was fine. Very generic shoujo. At first I thought the heroine was a child, and it always makes me feel gross when adult romance manga portray the heroine as being very, very young. Especially since the hero keeps infantilizing her and making her feel like, in her words, "a kid." Gross.

Happily deleting this book from my Kindle FOREVER. #BYEEEE