The Other Black Girl by Zakiya Dalila Harris 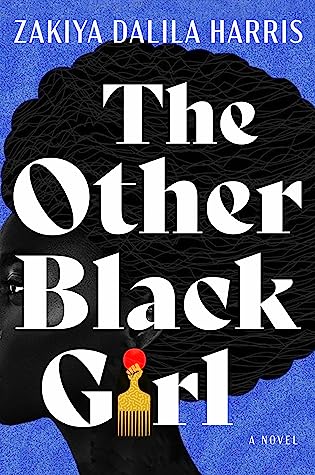 I've been wanting to read this book ever since I heard that it was being compared to The Devil Wears Prada meets Get Out. Because even though I know that nine times out of ten those comparisons end up being a total sham, my inner optimist always carries the small, quivering feather of hope in her heart. And lucky me, THE OTHER BLACK GIRL ended up being mostly everything I hoped it would be. Which is... basically, amazing.

Like, I could actually see this being a movie directed by Jordan Peele. The pacing is Hitchcock slow and it's not really a thriller or a horror story in the traditional jump scare, pulse-pounding breakneck race to the bloody finish most people expect from the genre, but I actually prefer that. And this book is creepy. And part of that is because the heroine, Nella, is so relatable. She's insecure, she's desperate to be liked and succeed, she lives in her head. So when she starts to second-guess everything around her, you're right there with her.

Nella is the only Black woman working in her publishing company, so when Hazel, another Black woman, joins the company, Nella's initial reaction is joy! Finally someone who will understand where she's coming from and commiserate with her whenever there's a new slew of microaggressions. Only... Hazel isn't exactly what Nella expected. She's way "better" at being cool and Black than Nella herself is, and not only that, but everyone in the company seems won over by Hazel, and pretty soon she's accomplishing leaps and bounds more than Nella has in two years. And then the notes start coming telling her to LEAVE, and Nella wonders... is it Hazel telling her to, you know, GET OUT?

I'm honestly surprised this book doesn't have higher ratings from my friends, because I think it's an excellent satire (albeit a bleak one) on the intersections between Blackness and coolness and how white people try to use peripheral associations to Black coolness to boost their cachet without actually doing any of the legwork into issues such as Black pain, Black history, or infrastructural racism. It felt like this book was showing how even as diversity is becoming more present in society, there is still a "way" that white society expects to present this diversity: i.e. in a way that makes them feel good. It reminded me a lot of this sketch CollegeHumor did called "Diversity Is So IN." The point of the video basically being that if we treat diversity like a trend, the implicit assumption is that one day, it could be "out."

If you liked Get Out, I do think you'll like this. There's a habit of comparing EVERY Black thriller out there to Get Out and it's a little eye-roll worthy, but there's enough parallels between that movie and this book that the comparison actually makes sense. I'm giving it a four instead of a five because the ending kind of hit all at once and I was kind of expecting a slightly more shocking twist but eh. It still had me reading this sucker in less than twenty-four hours so I must have loved it or something.