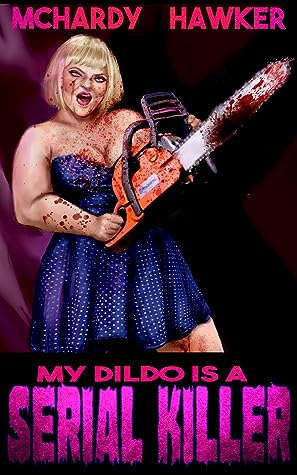 Hoo-boy. You know you're in for a doozy of a read when it has a title that you can't even say in your cross-posted Amazon review without tripping the "NOPE" censors. In case you didn't know, I have a weekly feature called "What the Actual F*** Wednesday," where I let my followers recommend me romance and erotica stories they want to see me read and review, and then I do that and talk about them.

You know what you're getting into when the book opens with a religious figure being attacked by an-- ahem-- adult toy that-- ahem-- is also possessed by a demon. Or something. (Spoilers!) Some of his fellow religious figures bless a bottle of Evian water and exorcise the toy, which causes it to fling itself away in anger. Where to? Who knows? Probably its next victim.

Cut to Christina, a plus-sized girl with a plus-sized chip on her shoulder. AKA, the next victim. She hates all her coworkers, who bully her; she hates her family, who abused her (horrifically and graphically so); and she hates the fact that she only really has refuge in food, which she indulges in by stealing her coworkers' lunches. One day, she soils herself in front of all her coworkers (who are dressed up in furry costumes at work-- because... inclusion??) and goes to an-- ahem-- adult toy store to cheer herself up.

That is where she meets Terry, the religious figure-abusing toy from earlier. He's just chilling in the bargain bin, obviously used (gross) and tells her that he'll give her three wishes if she purchases him. Which is a total lie. But Terry has evil powers. And faster than you can say "Feed Me, Seymour," Christina is killing people to feed Terry's blood lust in order for him to feed her-- ahem-- other lusts.

This book is INCREDIBLY graphic in all ways. The end of the book diverges from bizarro into straight up splatterpunk, imo. If you can't stand gore, you will not like this. There's also a lot of sexual content, and the book makes light of PC culture and blasphemy in a way that kind of reminds me of South Park. It's also kind of fat-phobic and big on gross-out humor. Personally, that style of humor doesn't always work for me and I think this book definitely pushed me out of my comfort zone and into the brain bleach zone, but I think other people will probably find it funny. People who are not me.

First, though, credit where credit is due. The book is very well written and it actually has a story. Which may seem like bottom-of-the-barrel praise, but HAVE YOU SEEN WHAT I READ FOR THIS CHALLENGE? Sometimes, the books read like they were written in fifteen minutes under the influence of dubious substances (even if said dubious substance is just too much sugar and too much free time). The story is also interesting. Even though I really didn't like the story, I could appreciate its construction and I found myself wanting to find out what happened despite knowing that this was probably a bad idea. And it was. Eep. I'm not really a horror fan, but if you are, and you also like South Park, you'll probably love this a lot.