Marriage at a Price by Chizuko Beppu 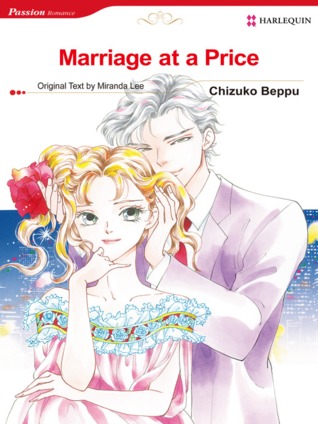 I actually really liked this one. The heroine, Courtney, owns a farm called X Winds. She used to run it with her mother, who died an untimely death after a heart attack, and now she's going solo even though the farm is like three million dollars in debt. Most of her mares are too old to breed and the one she has that's viable is skittish around male horses. If she can't find someone to invest to buy her the time she needs to turn around, everything will go under.

When she goes to the track with her friend to hobnob and find an investor, she meets Jack, a down-on-his-luck rich guy who I believe owns one of the horses she bred with her mother when the farm was at its peak: Big Brutus. They have pretty good chemistry and when she saves him from his meanie ex-girlfriend by splashing water on her, they get to talking and he tells her that he might know someone who will be a shadow investor.

There's an almost Harvest Moon vibe to this book. Cozy farming scenes, adorable baby animals, pictures of horses frolicking in the grass. And Jack is actually a sweetheart. A lot of these Harlequin novels have heroes who are pretty unapologetic jerks but he's actually really, really nice. He respects her hard work and tells her that she looks so at home with a cowboy hat (EEK) and even gives her a hand around the place. And his awe and joy when one of the horses gives birth is so precious, that I COULD NOT.

If you like cute Harlequin romances with minimal drama, heartwarming elements, very little OW drama, and-- of course-- cute animals, this is your jam.