A Once and Future Love by Anne Kelleher 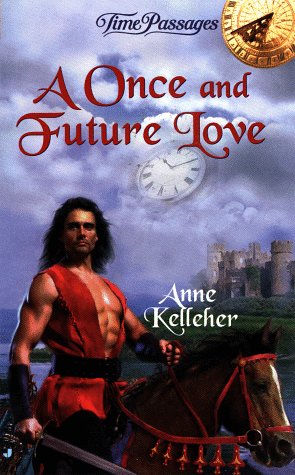 For my birthday last year, my mom got me a ton of time travel romances and I have barely made a dent in them. A ONCE AND FUTURE LOVE was one of the books that was in the box she gave me. Despite the cheesy title and the even cheesier cover, it's somewhat unique among its time travel brethren because in this case, it's the dude going back in time.

Richard is a father and a grandfather with a dad bod and a lot of grief. He's currently on a trip in England-- a trip he should have taken with his wife, before she died. Now he's flying solo, looking into the very lands that his ancestor, a land-holding knight named Richard de Lambert, used to hold in the days of King John and the Crusades. While climbing a tower in some old castle ruins, he thinks about how much he wants to be with his wife, before taking a mean tumble. And then POOF.

When he wakes up, he's in the prime of his life. No more dad bod. He's ripped, my dudes. Also everyone around him is speaking scary Medieval French. That's because he's in Normandy. Also, his ancestor was a dick. We get a taste of his personality in the prologue-- he was mean to children, abused his wife, and liked killing people in battles. Especially (but not necessarily) if they were Welsh. So naturally, he winds up with an arrow in his throat. And naturally, Richard's soul casually fills up that body like it's a free drink refill at the Costco food court.

This book kind of reminded me of OUTLANDER and AWAKEN, MY LOVE, only shorter and way less focused on the "whys" of the time travel. Richard gets over the fact that it might be a dream pretty quickly because he's practical like that (he's a lawyer) and immediately starts trying to figure out the language and the customs. It doesn't hurt that Douchebag Richard's wife, Eleanor, is a deadringer for his own Lucy. Which is kind of weird, when you think about it. I'm pretty sure Richard just became his own grandfather and if she looks just like Lucy, maybe his wife was also his great-great-great-great incest wife or whatever. Yikes. This is taking a TIME ENOUGH FOR LOVE turn.

So I ended up liking this book. The writing was great, the research was good (I think), and the romance between Robert and Eleanor was kind of sweet if you didn't think too deeply on it-- except for one thing, which I'll get to later. There's even a secondary romance between Eleanor's half-brother, Hugh, and one of the Welsh girls... and he really does act like a lovesick teen. It's pretty funny. The only thing I didn't like was the end, even though it was realistic. Eleanor starts telling EVERYONE that Richard must be possessed by demons and this bad dude who wants to rape Eleanor and steal Richard's land is like "Haha! A plan!" So because of Eleanor, Richard is dragged off to a "He might be a witch" trial, where it's determined that he must prove his innocence in trial by combat.

IDK, maybe it's realistic that a change in personality like that = demons, but it was annoying AF to see Eleanor whining and crying about how her husband was too nice now and must be a demon. Maybe this is to show how damaged she is from Douchebag Richard's abuse, that she can't take a good thing at face value, but the psychology behind that wasn't really explored fully and Richard is just kind of w/e about it. Never mind the fact that he was nearly killed by the woman wearing the face of the love of his life. I think this could have worked if there were more emotional depth, but because it wasn't, it just ended up kind of making the heroine look like a two-faced bitch and Richard like a pushover.

Anything for some last-act drama, I guess.

Anyway, this was a fun quick read and apart from those annoyances, it was mostly a checklist of everything I like in "fluffier" medieval fiction. It's not a fave and I probably wouldn't reread but I enjoyed the ride and I think several of my friends would probably enjoy it.