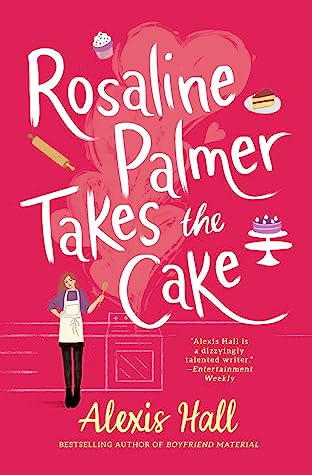 This book was so good that I actually want to cry a little. Before I get into the review, I just want to say that I love watching The Great British Baking Show (or The Great British Bake-Off, depending). Not only do you get to marvel at all the beautiful breads and cakes and pies, but you get so involved in all of the contestants and their stories. When the characters are booted off the show, it sometimes ends up being a really emotional experience for me and my family, who also watch the show. I've noticed that because of the increasing popularity of baking shows, there's been an increase in the number of books about baking shows, but not all of them can capture that magic of character-driven storylines and the connections between food and family--

ROSALINE PALMER TAKES THE CAKE is brilliant. It's about Rosaline, a bisexual single mother who has just been accepted as a GBBS-like contestant on the show, Bake Expectations. While on the show, she ends up capturing the attention of two guys: Alain, the sort of man her parents always hoped she'd meet, who has a posh accent and a plush job, and is at the top of his banter game; and Harry, an electrician who tends to put his foot in it, but is surprisingly soft and awkward for a dude who's built like a bruiser with big honking forearms.

Some people didn't like the love triangle bit but I really did. One of the love interests-- the less optimal one-- reminded me of one of my own exes, and he said and did a lot of the things that happened to Rosaline. Bringing me down to make himself feel superior, always focusing on things about me that needed to be "fixed." It's so easy to make mistakes when it comes to who we're attracted to, and sometimes we don't realize that right away. Part of Rosaline's journey is realizing that she's "enough" just the way she is, and that she deserves better than to be someone's pet project.

The other love interest-- the "good" one-- is just... lovely. He's one of the best beta heroes I've encountered in a while and I just love him so much. I love how Hall made him a working class hero and didn't shame him for it at all, and how all the usual stereotypes associated with that sort of job are totally flipped. He was the best.

But don't get me wrong. This is just a really good story, romance squee aside. There's the reality TV show element, first of all, which is fantastic. Hall totally captures the banter and the set-up that makes The Great British Baking Show so good. Also, Rosaline goes through so much in this book and she comes out as a stronger, more confident person. As someone who is also painfully insecure and a little shy, I find it so empowering to see women like Rosaline learning to stand up for themselves and set up boundaries. It's a really great message to see in romance novels and so moving. I loved Alexis Hall's other book, BOYFRIEND MATERIAL, but I think this one is even better. He just seems to get better and better with each book. I can't wait to read the sequel.