Lady of Ashes by Christine Trent 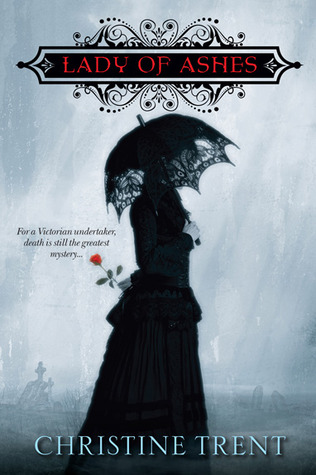 Ughhhh. So at first I was really into this book. It's about a female undertaker named Violet who ended up becoming her husband's partner. Her husband, Graham, had a hard time marrying because of his morbid profession and at first he was grateful that his wife was super into his work, but now that she's beginning to surpass him and becoming less interested in the minutiae of housework he's kind of starting to resent her for it. Graham also has a huge chip on his shoulder. He hates America because his grandfather was injured and humiliated in the Revolutionary war, so he's decided to sell guns to the Confederacy in the hopes of ruining the so-called United States.

One of the things I really liked was all the day-to-day stuff, whether it's tidbits about mourning etiquette or how to embalm people in Victorian times. I also loved the sort of "girl power" element to this book, with Violet taking a decidedly unfeminine occupation and KILLING IT, and also her relationship with Susanna, the orphan girl she finds sleeping in one of their shop's coffins one day. You really do feel like you're living and breathing Victoriana, which is kind of neat.

The downside to this book is-- well, all the things that other reviewers have complained about, basically. There are too many characters. There's too much STUFF going on. The actual murders that should be the focal point of the mystery kind of get lost in all the drama. It's super obvious who the bad guy is. The book wants to be a mystery, a romance, and a work of historical fiction, and it doesn't quite succeed at any of them. It's way longer than it needs to be and despite a strong beginning, it ends with a fizzle that makes me pretty unenthusiastic to read on.

I started out thinking FOUR STARS! But now I'm thinking two stars. I was so bored by the end.