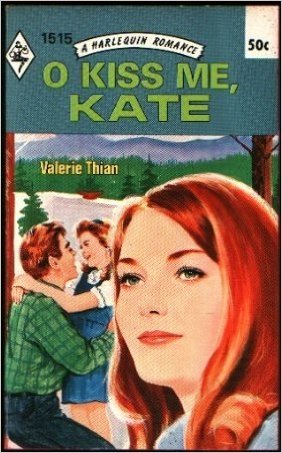 This review is dedicated to my sister, who provided me with some lovely romance novels to read. So far, I've liked a lot of them, like a Sophie Nash book that ended up getting me excited to maybe try more from an author I wasn't sure I liked, but sadly-- this one was a dud.

As you might be able to tell from that delightfully retro cover, this book was published in the 70s, and boy, does it show. It's a shame because the plot is pretty interesting. Our heroine, Kate, is the less pretty sister of a woman named Gina. Gina was the love object of two brothers: Ralph and Greg. She ended up choosing Ralph, leaving Greg to settle with Kate as the consolation prize-- or so she felt. Ralph and Gina have three children together and then die in an accident. Kate's parents are the caretakers but she does most of the watching, and one day Greg bursts into their lives. And oh, Kate had to push Greg away because reasons so he kind of hates her and she's still sort of into him but tells herself she hates him, too. And what ensues from all this? DRAMA.

I know you shouldn't judge a book outside of the context of its times, but it's way less easier to let things slide in historicals (which I usually read) rather than contemporaries. The casual sexism in this book (Greg tells Kate, essentially, that women belong in the kitchen, making the tea) and the focus on children and winning a man were just exhausting. It reminded me of the phone calls I used to have with my out-of-touch grandmother, where she berated me for being single and told me to-- I kid you not-- go pick up men at the malt shops and the dance halls, because that's where all the boys are at. (Reasons why I'm still single #54299). The story was also a bit dull. I didn't feel like the leads had much chemistry and the most exciting character was a bitchy stepmom who kidnaps the kids.