Death by Dumpling by Vivien Chien 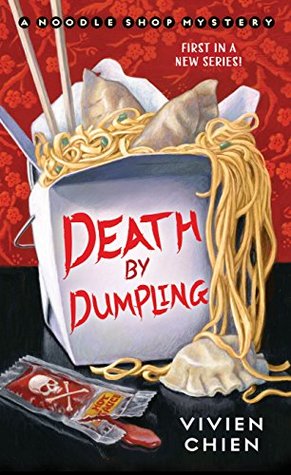 I don't normally read cozy mysteries but so many of my friends kept raving about this one that I ended up becoming really curious. DEATH BY DUMPLING is set in an Asian community in Ohio, where everyone knows everyone, giving this area of the suburb an almost small-town vibe.

Lana Lee, the heroine, is biracial, and in the middle of a quarter life crisis. Having just been fired from her job, she's forced to work for her family's Chinese restaurant, while living in a pretty crummy apartment with her roommate and best friend, Megan. Being so close to the community puts Lana at the forefront of all of the problems, including rent prices. The property manager and friend of her parents, Mr. Feng, allegedly has plans to raise the rent prices of the plaza shopping center, where Lana's family's restaurant resides, as well as a number of other small Asian businesses. A lot of people aren't too happy about this, which is maybe why it isn't too shocking when he turns up dead.

As it turns out, Mr. Feng is deathly allergic to seafood and someone switched out the pork dumplings he ordered from Lana's family's restaurant with shrimp ones-- and then they stole his EpiPen just to make sure they finished the job. But who would want to kill him? And is it really just about rent prices? Lana decides to look into things herself, which results in a sort of love triangle, unearthed family secrets, and someone's murderous desire for revenge.

So as I said, this isn't the normal type of mystery I gravitate towards, but I've been reading a lot of dark things lately and I thought it might be fun to "cleanse" with something more light-hearted. I love the covers for these books and I think they do a really good job setting the tone for the books. This is a little light-hearted, but it also seems to be geared towards a younger audience. I think, since the heroine is in her twenties, this might be enjoyed by YA readers as well as adults, especially since there's a bit of a romance and there's as much focus on food and relationships as there is on the mystery itself.

I actually was never quite sure whodunnit, which made me happy. The only things that kept this from having a higher rating were that it didn't quite have the emotional tension or stakes I would have preferred. There's never any real sense of danger and I didn't really feel much emotional connection with the heroine, not because she wasn't likable, but because all of the tension was mostly surface-level. So, if you're looking for something light and fun, you'll probably love these books. As for me, I liked them a lot and I will probably read further, but they didn't have me white-knuckling the cover, either.