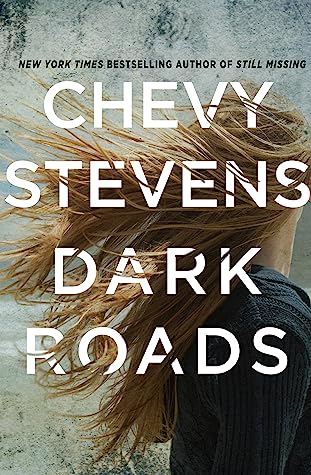 This is my first book by this author and I am so happy that I was able to buddy-read it with my friend, Heather. We've been reading a lot of mysteries lately and some of our favorites are about totally ordinary women who end up in totally extraordinary and dangerous situations. Especially if there's a little bit of smut on the side.

DARK ROADS is an interesting book because the two female narrators are both pretty young. In some ways, this almost feels like a young adult book because it's sort of a belated coming-of-age and tackles themes such as independence, first love, and asserting control over one's life. But it's also decidedly not a young adult book because the subject matter of this book is pretty disturbing. It's a little like Jess Lourey's work in that way. YA characters for adult readers.

The first narrator we meet is Hailey. Hailey is the daughter of a survivalist who, ironically and tragically, died. Now she lives with her aunt and her step-uncle. Her step-uncle is the absolute WORST. Not only does he control every facet of her life, he's also a total creep. Hailey's only two consolations are her best friend, Jonny, and her girlfriend, Amber. But her step-uncle seems determined to ruin all of her relationships before they even really get off the ground, and to make matters even worse, he's a policeman with way too much power.

The second narrator we meet is Beth. Beth is Amber's older sister and she goes into the town where Hailey lives, Cold Creek, after something terrible happens. Beth also thinks that Hailey's step-uncle is the worst and she also thinks Jonny is pretty swell, too. But the same mystery and bad blood that made Hailey's life so difficult is about to snowball its way right towards poor Beth.

Less is definitely more going into this book. Even the Goodreads summary is a little spoilery, although it does kind of give you a warning that you might need if you are triggered by certain kinds of content. I liked Hailey better than Beth as a narrator. Hailey felt way more immediate and in the moment, whereas Beth was just sort of there. She wasn't quite as compelling. The mystery also didn't quite hit right. I loved the beginning but the ending didn't make me go WOW the way I hoped it would and there also wasn't quite as much romance as I would have liked.

DARK ROADS was a really fun read but it was also a one-time read that I probably won't pick up again. The descriptions of the wilderness were gorgeous and I savored those parts like a fine red wine, but there was nothing else about the story that really made this stand out from other "girls in peril" books. That said, I did really enjoy this and the girl power elements it had. Woo.