In the Company of Women: Inspiration and Advice from over 100 Makers, Artists, and Entrepreneurs by Grace Bonney 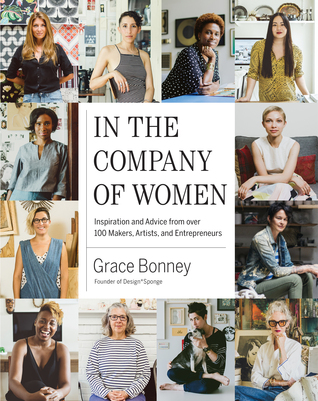 IN THE COMPANY OF WOMEN was gifted to me by a friend (who also gave me a beautiful Kate Spade coffee table book). It's basically a series of profiles about female (and nonbinary-- more on that) creatives, ranging from writers to woodworkers. Each woman gets a picture and sometimes you get to see pictures of their studios or homes. Each woman answers the same questions asking them about their work and aspirations.

The questions got a bit repetitive after a while, although I loved the two artists who answered with drawings. I loved the rep, though. This book has older women, queer women, trans women, women of all ethnicities (Black, Native, East Asian, South Asian), plus-size women, and even one woman-- a dancer!-- who is in a wheelchair. I also liked how one of the women answered the question "what do you do in the morning to kick the day off right" with "take my antidepressants." YES.

Some of the women were new to me but there were a few I recognized and loved. Janet Mock, Mary Lambert, Amina Mucciolo (it kills me that I didn't get to see their studio), Neko Case, Carmen Esposito, and Roxane Gay were just a couple of the names in here that got me really excited.

Some of the qualms I have: the studio pics were few and far between. As I said, Mucciolo's studio would have been SO COOL to see since they deal with rainbows. It also would have been cooler if these had been alphabetized or indexed by profession. The order seems pretty random and it's hard to find a page again once you flip past it. Also, I think Mucciolo identifies as nonbinary, but perhaps their identity hadn't been fully realized when this book was published? If so, this might be something to address in a reprint of the work. I also think it would have been neater if the interviews had been slightly tailored to the women and their various professions, just to mix things up.

Overall, this is a pretty neat coffee table book although not without some flaws. I still really liked it.