Unfollow Me by Charlotte Duckworth 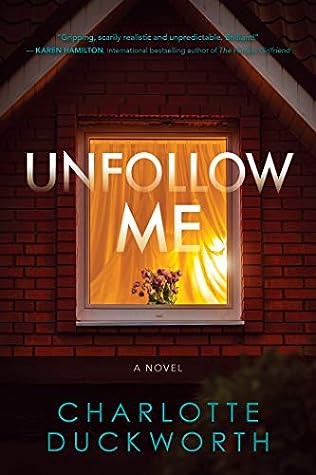 UNFOLLOW ME is a really intense read revolving around a popular "Mommy Blogger" named Violet Young. One day, without warning, she deactivates all her social media accounts leading to a flurry of speculation as to the reasons behind her disappearance. The book is narrated in three POVs: Yvonne, a forty-year-old woman who desperately wants a baby and hate-follows Violet, and Lily, a twenty-seven-year-old single mom who obsessively follows Violet's channel, and Henry, Violet's husband.

Through the POVs, we find out that Violet's life wasn't exactly as perfect as she let on, and that Yvonne and Lily have secrets of their own that play a role in Violet's life. It really reminded me a lot of Ellery Lloyd's PEOPLE LIKE HER, which told a similar story with a similar format, and I'd be hard-pressed to say which did it better. PLH is more of a straight-forward thriller whereas I feel like UNFOLLOW is more of a work of domestic suspense. It's less intense, which makes it feel more believable.

I like books that offer commentary on current events and I think that this author did a great job showing the dangers of the parasocial interactions that people experience with their favorite influencers and how that relationship can quickly turn toxic. It also shows how mothers are often imperfect people, fighting against their own standards of perfection, and even though none of the characters in here are likable (like, at all), they feel more relatable because of it. I went into this expecting something light and frothy and it was way more cerebral than I thought it'd be.