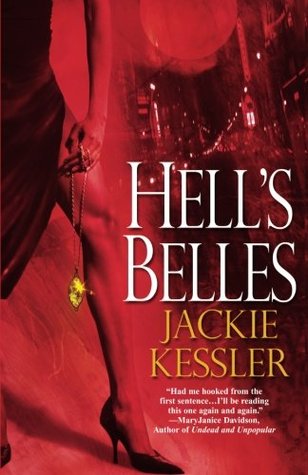 A lot of old Zebra romances are on sale in the Kindle store and I ended up splurging on a lot of them-- because I'm worth it. When I saw that the entire Hell on Earth series was basically $1.99 ea, or LESS, I was like, why yes, I would like to read some early 2000s paranormal romance. And this one is actually pretty original. Unlike the ENDLESS ARRAY of vampires, werewolves, and witches (oh my) from the genre, this book is about demons and furies and hell.

Our heroine, Jezebel, is a succubus on the run from her demon masters. She goes to one of her witch friends, drugs her, and steals her identity-- both her papers and her actual physical form-- before tricking her into giving up a charm that will mask her presence from that of hell. From there, she takes refuge in a strip club of all places, which I guess is a good place for a succubus to work. Do what you know, etc.

There's a dual timeline of sorts. Jez in the present, and then Jez in the past, in hell, leading up to the incident that caused her to flee in the first place. It's a little confusing but I rolled with it. Actually, I thought the parts set in hell were some of the most interesting parts of the book. It sort of gave me a Little Nicky vibe. I also liked the parts set in the strip club. All of the other dancers had really great personalities and the dynamic between the owners was deliciously toxic.

Where this book failed, for me, were the sex scenes. I thought they were pretty awful and quickly started to skim whenever they popped up. I mean, the word "splashed" is actually used at one point, and at one point the heroine says that this dude "bumped" her cervix. Um, no. Very gross. I also didn't really buy the chemistry between her and the love interest, which felt a bit insta to me. I thought her relationships between Duan and, yes, even Lucifer himself, were way more interesting.