I Know You by Claire McGowan 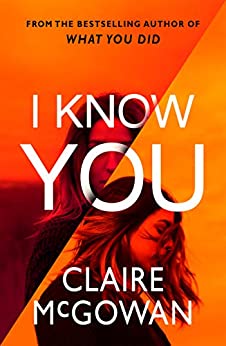 You know me, I love a good fucked-up lady thriller and thank goodness I have a friend (Heather!) who loves to read them as much as I do. I KNOW YOU is a checklist of several of my favorite tropes. It's dual timeline. It's got a woman confronting her past history. It's got hot dudes who might be evil. Basically, it's my crack.

Rachel works at a dog shelter and lives a quiet life in the UK. One day, she's taking her dog out for a walk and sees a dead body. It's the body of the wife of the man she's been seeing on the sly: Anna. Knowing she'll be seen as a suspect, she leaves the seen without telling anyone but then one of her scarves shows up by the body and she's implicated anyway. On the other timeline, in 2000, we see a girl named Casey working for a toxic family in LA as a nanny. A stressful job turns into a nightmare when the whole family is murdered and she's blamed as the suspect. The truths behind the two sets of murders converge, filled with all kinds of nasty secrets and lies, leading Rachel to hear the words she's hoped she'd never hear again: I KNOW YOU.

Did I tear through this in less than twenty-four hours? YES. It was amazing. I thought the author did a great job setting the scenes and giving both narrators plausible backstories. At times, it almost felt like a memoir because it was so grounded in reality. I guessed some of the twists (including one that I think was supposed to shock me) but others were a pleasant surprise. You know how it is though. Whenever you read a thriller like this, it's a tug of war between wanting to be right and wanting to be shocked.

I'd recommend this to fans of thrillers such as DARK PLACES, JAR OF HEARTS, WATCH THE GIRLS, and IF I DISAPPEAR.