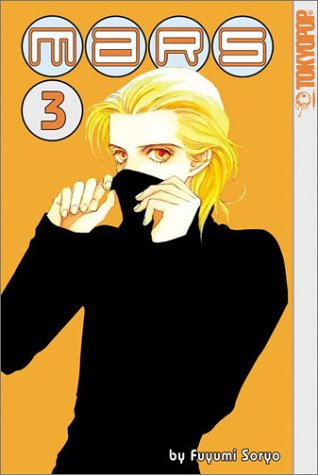 I've been feeling a little unfocused during quarantine. With all the days blending in together and the news becoming increasingly scarier, there is something comforting about retreating into the world of manga and comic books and their storyboard drama.

Mars was a series that I read in college, but I never got farther than book two. I can see why I didn't get through the third book, even though it isn't bad. Here, we finally get to see Rei race, but it takes up most of the storyline. Kira's mom forbids her from going to see him because Kira's father died in a car crash, and she has biases against racing because the people in the other car from her father's accident were, like, drag-racing gang members.

The story is 1/3 Rei racing, 1/3 Kira angsting about Rei racing, and 1/3 flashbacks about the two of them together. I loved the scenes with Kira's art. Art is like the go-to way to show a heroine is quirky and individualistic, but Kira's passion for it doesn't feel like a contrivance, and the way she looks at the world is genuinely colored by her artistic vision, which I liked.

I also like how even though Kira and Rei are very different people, they have a deep respect for one another and their hobbies. Kira doesn't push about Rei's tragic past and even though she worries about him while racing, she tries to understand her hobby. Likewise, art has a sad connotation for Rei but he tries to learn more about Kira and makes special allowances for her that he doesn't give anyone else. It's so much fun to see their affection for one another deep and grow in a realistic way.

We also get to learn more about Akitaka, Rei's racing friend who had a leg amputated following a motorcycle accident, and his wife, Kyoko, who also races. I hope we get to learn more about them as a couple, because I feel like they're a steadying and mature presence, kind of like what Rei and Kira could become if they're allowed to grow up together and mature as a couple.

I'm giving this 3.5 stars because there wasn't a lot that happened and it was a serious downgrade in terms of story tension and drama, although the mysterious crying woman at the end makes me suspect that there's about to be another rift that opens up between Kira and Rei, oh no.