The Next Big Thing by Johanna Edwards 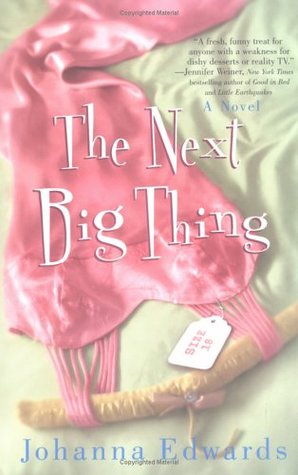 I can't buy Lays flavored potato chips or I will eat the whole bag. Even though I know they're bad for me and contain an insane amount of calories, I will eat them all completely unapologetically. Reading THE NEXT BIG THING was a lot like that. Published in 2005, it contains a lot of really outmoded views about women's bodies, gender norms, and how these two things tie into the funhouse mirror that represents society's idea of the perfect woman. It contained a lot of really toxic tropes, including fat-shaming and the idea that a man is the pedestal to which all single women must aspire to and climb to in order to achieve happiness. I knew, while reading, that these things were problems. But I couldn't stop reading.

You can blame my current obsession with reality TV-themed chick lit on the book, ONE TO WATCH. Like THE NEXT BIG THING, ONE TO WATCH also features a plus-size heroine who is unlucky in love, but the themes of that book are about learning to love yourself-- whether you have a partner in your life or not-- and cutting loose toxic people if they don't agree to see you on your terms. In many ways, THE NEXT BIG THING is exactly what I feared ONE TO WATCH would be: it is fatphobic and exploitative by terms, with an unlikable heroine who eagerly plays by society's rules, and abuses herself-- and others-- when she is unable to win by them.

Kat is a plus-size heroine who wears size eighteen clothes. She has a good job at a PR firm with the possibility of promotion and lives in her own house, with her own money, but she still seems to think of herself as a failure because she's overweight. She has a box of "skinny clothes" stashed in her closet as inspiration and she and her one fat friend, Cara, post "lookouts" when they shop at Lane Bryant because they don't want to be caught, and carry spare shopping bags from other stores to hide their purchases in while they walk around the mall. Kat has an online boyfriend named Nick who doesn't know what she looks like. She sent him an eight-year-old picture of herself from when she was thin and lies to him about what she looks like. When he wants to meet up, she resorts to pathological rings of lies, which are supposed to be cute and quirky, but, like CONFESSIONS OF A SHOPAHOLIC, actually end up making her look like she has severe mental health problems.

This lying continues when she gets accepted onto a reality TV weight-loss how, From Fat to Fabulous, which has sadistic contests where the contestants can earn "money." The person with the most "money" at the end of the show gets to cash out, whereas the losers lose everything. People who gain weight get docked "money," and people who lose weight gain "money." In the kitchen, there's a junk food-stocked pantry called "The Tomb of Temptation," where they're free to take what they want as long as they're willing to have their excesses filmed and broadcasted to a hate-watching public. Some of the contests include sharing a bedroom with an ex, posing nude in front of art students, and wearing bikinis. The cringe-watching factor was definitely on point here, as I would not have been at all shocked to see something like this airing in the reality heydey of the mid-2000s.

The heroine has also really internalized her hatred of fatness, to the point that I think it might be triggering to people who have eating disorders or body image issues. Women are referred to several times as "cattle," "heifers," or "pigs." Kat at one point expresses horror at the idea of the thought of someone performing the Heimlich maneuver on her to save her life because she's so embarrassed by the idea of someone putting their arms around her body. She seems to genuinely believe that nobody would love her or be attracted to her unless she's a six 4-6, and her palpable disgust at heavy women who are either sexual, confident, or unembarrassed by public eating is hypocritical and degrading.

Despite my irritation with the book, I couldn't put it down for a moment. The story is addicting, and it ended up feeling more true to reality TV than ONE TO WATCH did, in that it perfectly captures the self-loathing "God, why am I watching this" mentality of hate-watching or cringe-watching of people who tune in to something they know they should be disgusted by. I feel like this also really illustrates a lot of the changes that have happened in the last 15 years with regard to how we, as a society, view heavy women, body image, and gender roles. Apart from lots of semi-homophobic "I'm not GAY!" jokes, there's also lots of talk about how Victoria's Secret doesn't carry plus-size lingerie (I believe they now do), and how there aren't any plus-size fashion models who aren't below size ten (there now are). A lot of Kat's frustrations actually have been addressed by society, which is kind of nice.

I'm not sure I'd recommend this book to anyone since I think it is such a sensitive issue, but if you're curious about 2000s attitudes towards women's bodies and feel like reading the book form of some cringe-inducing reality TV, this book definitely meets the mark.