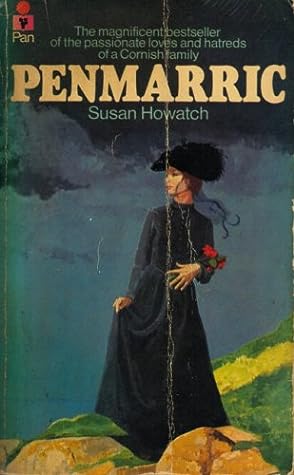 When people think of the 70s, they generally think of bell bottom trousers, Farrah Fawcett hair, or disco. Me? I think of chunky family sagas. Before the bodice-ripper craze of the 1980s, Gothic romances and multi-tiered family epics were in, and PENMARRIC is the perfect example of what a prized specimen of the genre looks like. Based on the lives of Henry II and Eleanor of Aquitaine and their many children, PENMARRIC is set in late 19C and early 20C Cornwall, revolving around a crumbling Cornish estate and petty manners of inheritance, and the bickering chains of family lineage that twine and intertwine in numerous and surprising ways.

Mark Castellack becomes an inadvertent heir to the Penmarric estate after having it long be denied him. He isn't a Penmar, though-- at least, not by marriage. But his mother, it seems, might have some personal grievances involved that go well beyond the matter of contesting the will. His father, Laurence, is also a Castellack, an intellectual and moral man, but after Giles Penmar makes Mark his heir, their relationship suffers-- especially when Mark's promiscuity begins to dive out of control.

After an affair with a gently-bred woman named Rose that ends about how you would expect, Mark marries a woman named Janna and takes her to Penmarric. We get to read the book from both Mark and Janna's POVs and I loved seeing their story from both their eyes. How Mark's infatuation with Janna borders on violent obsession and how little respect he clearly has for women, especially when they behave in ways contrary to how he expects and tumbles from his pedestal. Janna, on the other hand, is a woman of low birth who had to struggle and strive to make a living. At first, she blossoms in Mark's harsh glare, but after a while, the wonder fades, and so does their romance.

The next chunk of the book is told from their children-- both Mark's children of his marriage with Janna, and the ones he had out of wedlock with Rose. We follow these offspring from childhood to adulthood, from petty rivalries, to the parts they played in WWI and WWII, their affairs and betrayals, their battles and rivalries over inheritance, their grievances, their secrets, their day-to-day lives. Honestly, if you had told me that Susan Howatch could sit me down and have me eagerly read about a character obsessed with the rigors of tending a mine and mining, I would have laughed, but then I read this book and I ended up being fascinated with the concept of tin mining.

One thing I loved about this book is how Susan Howatch doesn't concern herself with moral highhandedness. The characters behave in often unscrupulous or unlikable ways, and she lets them do it. This is not a morality play. These characters come across as painfully human in their flaws, and honestly, considering that this book was published in the early 1970s, her attitudes towards a lot of concepts like LGBT+ matters and abortion come across as shockingly progressive. I love how each chapter opens up with quotes taken from history books to let you know which character and historical event she is doing an allegory for because there is a HUMONGOUS cast of characters in here and it was hard to keep in mind who was who, let alone which Plantagenet they represented.

I love reading about Henry II and Eleanor of Aquitaine so it was really exciting to find out that this was an allegory to that time period (I honestly didn't know that when I started reading it until I checked out some of the other reviews). This book is LOOOOONG but I read through it surprisingly quickly and one of the things I had forgotten about reading long books is how immensely satisfying it is when you finish them, like tucking into a multi-course meal. I loved this book and can't wait to read her other one, CASHELMARA, which is about the Edwards (I, II, and III).

If you enjoy chonky historical fiction about gloomy people living in gloomy estates, this is the perfect book for you.