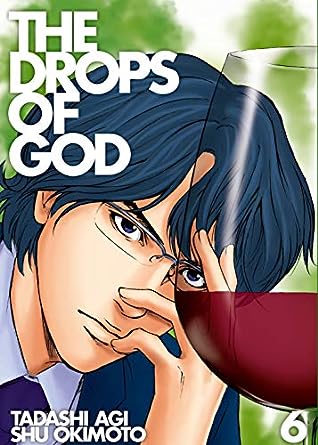 What good is it to even have a following on the internet if you can't get people super obsessed over the same things as you? That's what I've been asking myself as I've been plunging into this relatively obscure manga for adults, The Drops of God. It's a manga about wine making, wine tasting, and wine pairing, and as a Californian who loves all things wine, I'm obsessed.

This is kind of a two part "episode." The first half of the book is about the creepily flirty "fauxtalian," Honma, and the one-sided love affair that led to him eschewing all French wines. He finally spills his tragic story to his friends, gets over being put in the friendzone, and comes to terms with the fact that sometimes happiness means letting people go. A pretty mature message for a book geared towards young men, I thought.

The second half of the book is about-- YES-- another contest involving blind tasting. Shizuku's loyal friend and wine sommelier-in-the-making meets a childhood friend again with his arrival as a big-spending customer. But despite his humble origins, he's become a terrible snob and thinks he can sell wines the way people buy designer bags: through the allure of the label only. Now Shizuku and Miyabi must find some mediocre but pricey wines to pair against cheap and luxirious-tasting wines to prove him wrong OR Miyabi will quit her job with their company and go to work with him as a consultant instead-- oh noes.

This time, I decided to Google some of the info about the history of the big five chateaux because I keep saying "ohhhh it sounds authentic!" without really knowing all that much, and it kind of makes me feel like a phony. So I did some light Googling and yes, it seems like the information really is authentic: much more so than I previously thought. I wouldn't be surprised if the authors maybe took a couple liberties, but a lot of the stuff they're talking about does seem factually accurate.

Sometimes the descriptions of the wines are so over the top and cheesy, but I think the mangaka did it so they could have pretty, fantastical scenes to draw. I must admit, I did like the idea of a highly tannic wine being compared to a dusty Egyptian tomb in the middle of the desert. I'm a basic b, so I would compare it to licking a dry, tea-stained paper towel for minutes, but the effect is the same: dry mouth and sorry you. Some might find them annoying and fanciful but I kind of like them.

I would recommend Drops of God to anyone who loves wine. I feel like it does such a good job of portraying wine culture and the types of ridiculous individuals you sometimes meet in the wine scene, like label snobs, region snobs, etc. This manga might be boring if you don't care about wine at all, but if you do, it will make you want to have a glass right now, with a full course meal to pair it with to boot because oh, yes, I haven't even talked about the food porn. Manga and anime do a great job making food look super appealing period, but Drops of God takes it a full step further.