The Invention of Curried Sausage by Uwe Timm 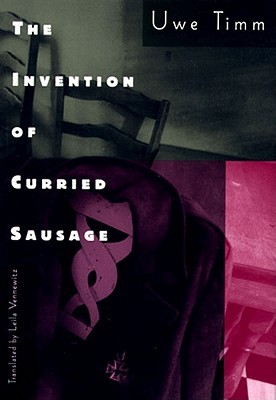 THE INVENTION OF CURRIED SAUSAGE is autofiction. Uwe Timm, narrating as Uwe Timm, recalls that his first remembered time eating the German dish of curried sausage actually precedes the time of its acknowledged invention in 1950s Berlin. In this novella, we see him track down the woman who (wo)manned the food stand of his childhood, now blind and in a retirement home, and she tells him that she is, in fact, the inventor of curried sausage through a looooong meandering story set during WWII, where she falls in love with a deserter while her husband is at war, that ends with the allies defeating the Nazis and liberating the camps, and Germany struggling to right itself in the midst of their collective shame at what they have done to the Jewish people, and the poverty from their collapsed economy.

My mom brought this book back for me as a present while traveling in Europe and shhh, nobody tell her that I didn't like it, because it's one of her favorite books. I was wondering why I found this in a drawer, covered in dust, and then as I read, I realized that I actually did vaguely remember giving this a try when she first gave it to me years ago and then getting bored and putting it in the drawer. Sadly, I couldn't get into it this second time, either, although I actually finished this time. I don't know if it's the translation of the work, but the wandering narrative really didn't work for me. Parts were interesting-- like the food stand woman, Mrs. Brucker, finding empowerment in the absence of her good-looking but domineering husband, and flouting the conventions of the ties-- and you know me, I'm a sucker for food descriptions. But even though this book is just over 200 pages, it felt like it was 2x longer because of the pacing.

And man, is the invention of curried sausage dragged out. You don't find out how it was invented until literally the last couple pages, and even though Mrs. Brucker kind of tells you several times that it was an accident, it really was an accident and it just feels so contrived and silly that it kind of feels like a cop-out. I know, I know-- a lot of great inventions were accidents, but still. I was disappointed. The story I was told didn't really feel like it was worth reading about to its conclusion, which makes me sad, because it's my understanding that this is a pretty important literary work in Germany.