The Harvest of Samhein by José Antonio Cotrina 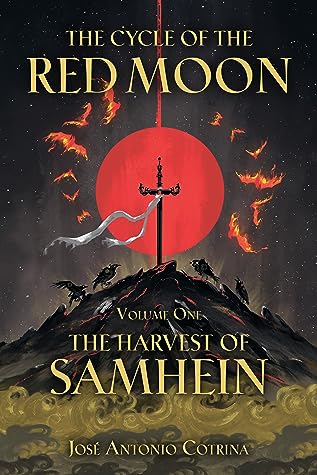 The Goodreads blurb for this book claims that it's "the fantasy trilogy that took Europe by storm" but none of my European friends have read or reviewed it, so I'd be interested to know if any of you out there actually read this series! I had never heard of THE HARVEST OF SAMHEIN before receiving my ARC, but I was in the mood for a fantasy novel and was up to the risk.

It actually reminds me a lot of the darker young adult fantasy novels I read in middle and high school, kind of like Clive Barker's ABARAT or Gillian Rubinstein's UNDER THE CAT'S EYE. The world-building is creepy and I loved the idea of twelve teenagers being kidnapped from their homes by wizardly demigods to engage in what's basically an extended episode of Survivor for the right of succession.

I read this book in a day and didn't see anything technically wrong with it. The writing is spare and breezy, but paints the scene. The translator did a good job with the original Spanish; it doesn't have that telltale clunkiness that a bad translation sometimes has. I thought the world-building was interesting, and Rocavarancolia definitely comes off as both perilous and creepy.

The problems with this book are the characters and the lack of opportunities with the world-building. They seem pretty two-dimensional and can be defined by basically one description, like "jerk," or "leader." I wish they had been fleshed out more and that we'd gotten to know them better as people. Likewise, I feel like there were so many more opportunities to really plunge into this world, the way Clive Barker did with his ABARAT, and show off all the gleeful horrors of this dark world to the full extent it had to offer. It was a cool world and I wanted to see more of it and learn more about it.

Goodreads says that book one is 600 pages but my copy had under 300, so I'm not sure if that's in reference to an omnibus edition of books one and two in the original Spanish, or if there were some major cuts when this was adapted to English. Either way, it was an interesting read and I would recommend this for children in the 12-15 age bracket who are okay with slightly darker fare.