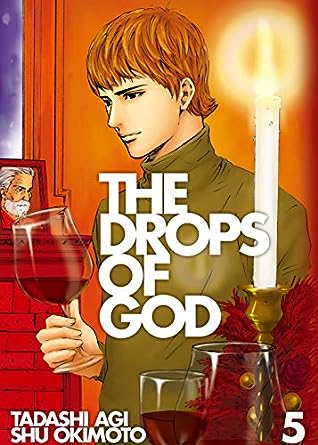 I've been feeling a little sad lately due to quarantine and other reasons, so I've turned back to manga, my one true love (well, okay, not really-- I have many loves). This one in particular is currently free on Kindle Unlimited and after trying book one on a whim, I accidentally became obsessed and have gradually been working my way through each book in the series as if they were bottles of wine to be savored slowly, glass by glass.

A lot of people think that manga is for kids but there are actually manga made specifically for adults. Drops of God, being about wine tasting and the making of wine, is obviously not a book for eight-year-olds. It's the saga of a young man named Shizuku who is the son of a famous wine critic. When his father dies, Shizuku's inheritance is made contigent on a Willy Wanka-esque contest involving guessing twelve bottles of wine, plus an elusive bottle called "the drops of god." If he guesses all the wines correctly, he inherits. Otherwise, everything could go to his father's adopted son, Issei!

Book five teases at the identity of one of the twelve mystical wines, nicknamed "the twelve apostles." Do we actually get to find out what it is? NO. Instead, we get an amnesia plot. A women named Kaori has lost all of her memories before a car accident, except for the taste of wine that matches the clue of the first apostle that Shizuku is trying to figure out. At the same time, Issei is tasting spring water with a temple monk, using that pure clarity to meditate on his memories of wine. Because these two fools are more pretentious than a drunk college boy starting his first Philosophy 101 class.*

*It's okay, though, because I love it.

I really love how episodic these manga are. Each one has a new story that still fits in within the overarching arc, resolving the smaller subplot while raising new questions to be resolved in future episodes. The passages about wine making and wine tasting are pure poetry, and every time I read one of these books, I end up craving a glass of wine. They're so good, and I think that anyone who enjoys wine tasting will really enjoy these. I wish they were a Netflix drama. It feels like Netflix is really picking up a lot of K-, C-, and J-dramas, and hopefully this will become one of them.

Deducting .5 stars because the idea of wine waking someone up from an eight-year coma is a bit ridic.