My Sister: How One Sibling's Transition Changed Us Both by Selenis Leyva & Marizol Leyva 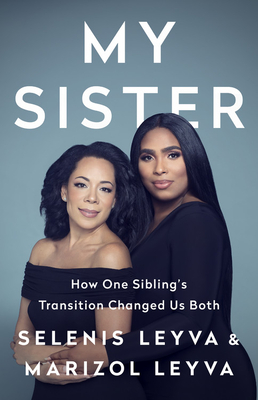 MY SISTER is an excellent memoir, co-written by Selenis Leyva, from Orange Is the New Black, and her sister, Marizol, who is a transgender woman. Each woman tells her story about growing up in the Bronx in a Latinx household, about their family life, and how each of them gradually become aware of Marizol's identity, and what her transition meant for each of them.

First, I strongly encourage you to read the intro to this book because it explains some of the choices the Leyva sisters made (together) when writing this book. Selenis writes about how using a "dead name" is harmful, but both of them agreed that in the parts of their childhood, it was necessary for the honesty of their story that Selenis use the pronouns she mentally associated with her sister at the time, to show the transition of her way of thinking and coming to terms with her sister. It even serves a crucial turning point in the narration, and man, it is POWERFUL.

I could feel my heart sink.

Man, there is so much to love about this book. It's honest, intense, painful, uncomfortable, and sad... but also really hopeful. I love how meeting Laverne Cox was so important to Selenis on-set because it made her feel like her sister's story was being told, and how she introduced her sister to Cox and tried to make such a public show of support. The bond between them endured so much, because Marizol endured so much, and it makes me so upset that the things that Marizol faced-- threats of violence, abusive relationships, child abuse, sex work, non-compliant government workers, judgemental people, self-medicating drug use-- are the realities for many trans individuals, it hits hard. When the Social Security agent refused to help her change her assigned gender on her card, saying it wasn't "allowed," I literally wanted to scream.

That is actually another reason they decided to write this book. They wanted to show that Caitlyn Jenner's story-- one of whiteness, success, glamor, and privilege-- does not reflect the reality for many transgender individuals. And even though her positive reception was a win, it is not a win that necessarily carries over to others. It's really hard to read, but I do recommend MY SISTER to anyone who is interested about the life of one of the actresses on Orange Is the New Black, and how she got into activism because of her equally fascinating sister, Marizol.