Demystifying Shariah: What It Is, How It Works, and Why It's Not Taking Over Our Country by Sumbul Ali-Karamali 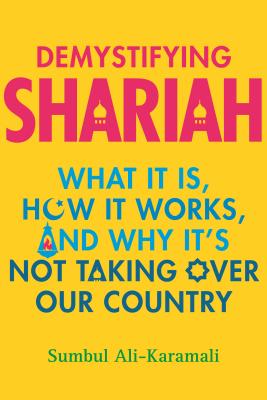 First, a disclaimer. I am reviewing this book as a non-religious person who is not all that familiar with any religion, let alone the religion of Islam. This book is very dense, more like a textbook than something one would read for fun, so it was difficult to get through the vocabulary and the unfamiliar concepts, so if I get something wrong, that's probably on me. I really tried to understand the book to the best of my ability but if you're familiar with a concept and want to weigh in respectfully and factually, please feel free to do so in the comments. (Offensive or bigoted comments will, of course, be reported and/or deleted.)

The author of DEMYSTIFYING SHARIAH, Sumbul Ali-Karamiali, is a corporate lawyer who then got a degree in Islamic law. In this book, she endeavors to debunk some of the (largely Western) misinformation surrounding the religion of Islam, thanks in part to political propaganda and FOX News, but also from people who might not mean badly but whose ignorance causes them to say very harmful things.

One of the repeating points is that "shariah" is not a scary concept in and of itself. "Shariah" is often used interchangeably with Islam because it represents the rules one must follow to be a good Muslim. If I understood the author's point correctly, these "rules" come directly from the Qu'ran itself, which distinguishes them from "fiqh," which are interpretations by man, and therefore mutable and fallible, which seems to be similar to how the Pope can speak both ex cathedra and not.

Two other concepts the author talks about are "fatwa" and "jihad." The meanings have gotten confused, and many people take these to mean "religious violation with a death sentence" and "anti-Western/pro-Islam sentiments with violent undertones." She says that both of these interpretations are incorrect. A fatwa is a decision made by an Islamic legal scholar based, I believe, on the interpretation of the Qu'ran. Since the Qu'ran, like the bible, is up to interpretation due to imprecise wording or vagueness, a fatwa can come into conflict with another fatwa, but they aren't binding. Part of the reason "fatwas" gained such a bad rap was because of the controversy of Salman Rushdie, but the author says that most people would not approve of that edict, that it was borne of a grudge.

Likewise, "jihad" in its true meaning, refers to the way a striving Muslim attempts to better themselves and society. It has been co-opted by a violent, radical extremist group, but not necessarily for religious reasons: the word is powerful, and their use of that word for their cause is probably to legitimize themselves as well as to use those strong feelings and direct them towards a bad cause. Christianity, the author points out, has been abused in similar ways throughout history and there are many hate groups in the United States to this day that hide their agendas behind a religious banner.

The religion of Islam is part of the Judeo-Christian canon. They believe in heaven and hell and recognize Jesus and Moses as prophets. They worship the same God, albeit in a different language (because, hello?), but many of the fundamental tenets are the same. There are some aspects to the religion that are less flattering than others, but many of its elements are strikingly progressive, with anti-racist, anti-slavery, and anti-sexist passages, some of which are very empowering to women.

Islam has gotten a bad name in the news but that is partially due to a lack of informed reporting in the Western news and partially due to people using the religion as a tool to further their own agendas (often in ways that go against what the Islamic religion should and is supposed to promote). This is not a book that can really be read casually for pleasure, but I do think reading it will make you a more informed person and will supply you with the tools you need to think critically about the media reports we get that talk about Islam and the Middle East in antiquated terms loaded with colonial stereotypes. No religion is perfect, but at the end of the day, intent is what truly matters.