My Little Pony: Friendship is Magic Volume 2 by Katie Cook 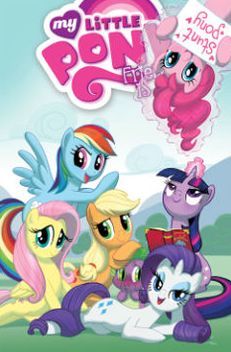 Adorable! I received an ARC of this book like seven years ago, but ever since the series appeared on KU, I've been re-reading these adorable comic books. My Little Pony is a franchise that I have loved since I was a little girl, but the reboot succeeded in a way that the original really didn't with strong characters, great storylines, and some intense conflicts with villains.

This book chronicles the return of the same nefarious forces that transformed Luna into Nightmare Moon, only this time, the focus is Rarity, who ends up becoming Nightmare Rarity. Rarity's friends go to the moon to save her, where they encounter a number of transformed creatures, as well as their worst fears, and a corrupted version of their friend who has destruction on the mind. Luna joins them but is plagued by her own guilt and a sort of PTSD over how terrible her own transformation was.

Volume 2 definitely has a Care Bears/Sailor Moon/Power Puff vibe to it that is incredibly nostalgic and charming. I've always been a sucker for the trope of a bunch of characters with cooperative powers teaming together to fight evil. This book in particular really drives home the point that the things that make us unique can also be what make us good people, which is sweet.

Not too much else to say about this one that isn't ~spoilers~. The art style is great (Pinkie Pie always makes me laugh) and the villain is suitably terrifying. Like the previous book, the darker content is offset by well-timed humor, and the themes of friendship triumphing over evil and personal securities remains the same. I definitely feel like these books are purposefully making homages to 80s and 90s nostalgia, and even though it was less prevalent here, I definitely enjoyed those moments.