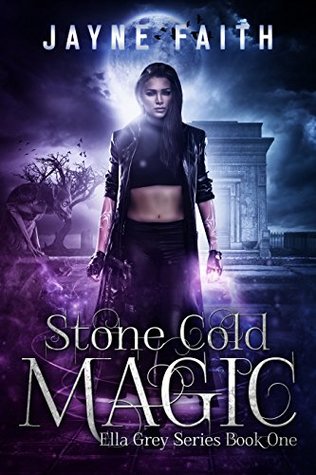 This is one of those books that I never would have discovered if not for Goodreads. I picked it up as a freebie, and almost purged it while cleaning out my Kindle, only I noticed that a lot of my friends gave it really good reviews. I'm glad I didn't delete it because it was a lot of fun. I think the Amazon blurb compared it to Ilona Andrews but that isn't really a fair comparison; this reminds me more of Pippa DaCosta's The Veil series.

The heroine, Ella Grey, is a paranormal police officer, part of a task force devoted to bringing in lesser demons. One day, however, while intervening in a more ordinary scenario: breaking up a group of boys terrorizing a young girl, she ends up getting involved in a high stakes conspiracy case when she learns that the girl's brother has been possessed by a demon and sucked into a gargoyle, creating a sort of possession three-way that seems to be the work of the sinister Gregori Industries.

As if that weren't enough, Ella, who recently had a near death experience, learns that she might not have come back alone from her near miss with the autopsy room. Something has possessed Ella and given her strange and inexplicable powers, putting her at terrible risk-- not just from the possessing spirit, but also from dangerous people who would like to exploit her powers, all in the name of science.

I liked the strong heroine character, and there was a fun cast of side characters (including a gay character who wasn't stereotyped at all and was just as kick-butt as the heroine in his own cool way). There's a love interest, but I wouldn't really call this a paranormal romance, as nothing super romantic happens until literally the last chapter. This reminds me a lot of the urban fantasy novels that I devoured in abundance in the mid- to late- 2000s. Not particularly memorable, but packed with action and strong heroines and swoony love interests and dangerous situations.

If you enjoy Jeaniene Frost and Pippa DaCosta, I think you will enjoy this author as well. It looks like the rest of the series is available on Kindle Unlimited, and since I have that subscription, I may come back to the rest of this series eventually. As it was, I thought this was very enjoyable, and had I paid money for it instead of getting it as a Kindle freebie, I would have been equally as pleased.