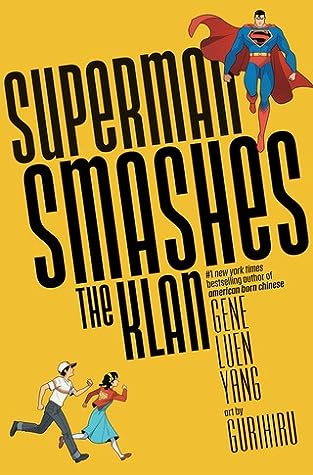 As soon as I saw the title of this graphic novel, I knew I had to have it. Gene Luen Yang is one of my fave comic creators, and he's so versatile. Whether he's penning Avatar: The Last Airbender, autobiographies, or bizarre space operas about alien zoos, I haven't read a thing by him that I didn't like. SUPERMAN SMASHES THE KLAN, I'm happy to say, is no exception.

Apparently, based on the blurb on the back of my ARC, this is based off an old Superman radio show broadcast from the 1940s called "Clan of the Fiery Cross." Here, Yang breathes Superman to life in a really interesting way. The stars of the story are a Chinese-American family, the Lees, moving to Metropolis from Chinatown. The father is a doctor and the mom stays at home with the kids, Roberta and Tommy, who have Western names to help fit in.

Most of the Metropolis kids are really friendly to the Lees, although they sometimes say things on accident that come across as mildly offensive due to their ignorance. Tommy is more willing to laugh things off and be self-deprecating, but his younger sister, Roberta, is more sensitive, and doesn't think that they should have to make fun of their culture to get along with others. But there is one kid who goes out of his way to be rude, and as it turns out, his father is a white supremacist who hates not just the Lees but anyone who is different, and has sinister plans in the pipeline.

Juxtaposed against this, we see a very young Superman, who is still tortured by his own childhood of being a literal alien and not fitting in. He hasn't come into all of his powers yet, and he struggles with the desire to use his abilities to do good and being branded as some kind of freak by the people whose acceptance he craves. It's very touching and sweet, and I think relatable to anyone who has ever felt like an outcast. It also shows why the idea of discrimination seems to affect him so strongly, so personally; he knows firsthand what it's like to feel like you're different and alone.

I love the way that Yang and Gurihiru captured the 1940s with their art and dialogue. It is progressive without being anachronistic, and there are some really interesting parallels between the use of alien invaders in horror movies and pulp and the increase of xenophobic sentiments among folks as the demographics of cities and their surrounding suburbs change. This is very subtly illustrated with a horror movie the kids are watching together where the alien villain looks Asian.

SUPERMAN SMASHES THE KLAN is a young adult comic but it can and should be enjoyed by everyone. The positive themes of community and welcoming, and kindness triumphing over evil, were exactly what I needed to read right now. It's a comic that shows, beautifully, that even though some people live out their lives with hate in their hearts, not everyone is beyond redemption-- but they need to redeem themselves, and not at the expense of those whose suffering they have contributed to. It's also a story about learning to examine your own biases, even if you're within a marginalized group, and the importance of opening yourself up to the fear of hurt in order to reach out and make connections. Just an abundance of positive messages everywhere, couched in a dark and surprisingly knuckle-tightening storyline. I enjoyed this much more than I thought I would.

(And I thought I would enjoy it a lot.)