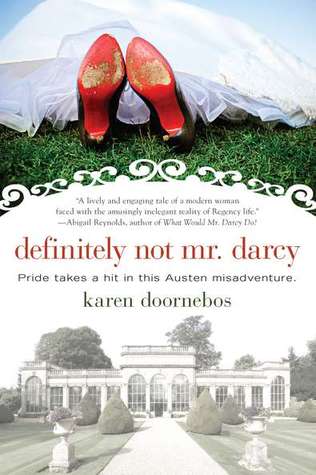 Since libraries and bookstores are closed right now, me and some friends have been exchanging small bags of books via porch drop-off (and then sanitizing them with wipes, ofc). DEFINITELY NOT MR. DARCY was in my bag, and when I found out it was based around the premise of a Regency-themed reality television show, I was ready to go full ham on this chick-lit.

Our heroine, Chloe, is a single mom in her late-30s yearning nostalgically for the days of yore in books when men courted women, letters were hand-written, and dresses were elegant. She's a Jane Austen fan, because of course she is, and in need of money, so when she signs up for what she thinks is a Jane Austen game show, she thinks the cat is in the reticule. Unfortunately, it isn't a game show-- it's a dating show and she's one of the finalists.

Eight ladies are competing for the heir to the estate, Mr. Wrightman, who seems like a total Prince Charming on paper. The catch is that they must obtain "Accomplishment Points" by doing appropriate ladylike activities, like the languages of fans or sewing, and unladylike behavior results in docking of said points. If they perform well, they get alone time with Mr. Wrightman, but if they fail, well, you're off, and Bob's your uncle.

DEFINITELY NOT MR. DARCY turned out to be just the light-hearted read I needed right now. I often find myself sighing nostalgically for the pretty costume dramas, but this book solemnly disabused me of the notion that older is better, with its horrors of lemon-squeezed underarm deodorant, once a week baths, side sadle riding, and, oh yes, chamberpots and rags. (Although, what with all the toilet paper shortages here in the States, that's a nearer horror than I feel comfy with.)

Chloe is a likable heroine and I liked all the cattiness with the other ladies, especially Grace. I think it's slower-paced than some might like, but it ended up working because of the time period (and I learned a lot of new facts about Regency England!). The romance is very slow-burn and has a very Austen-like ending, in that the heroine finds love but not at the cost of her dignity or self-respect. I felt like it was a very nice modern throwback to Austen romances, which made me very happy.

I'm giving this three stars because I'm not sure I'd read it again or that it's particularly memorable, but it was a satisfying read and I had a good time living vicariously through Chloe as she had her preconceived notions about costume dramas-- and romance-- shattered.