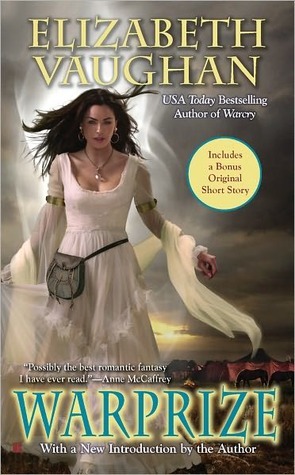 WARPRIZE was a book that I put off reading for a while because I'd hyped it up in my mind so much that I was afraid it wouldn't meet my expectations. But I finally mustered up the courage to read it and much to my surprise and delight, it exceeded my expectations in all ways. This is a slow-burn romance with a light fantasy setting that makes up for the lack of magic with great world-building and a diverse and interesting cast of characters who are all worth getting to know. I had so much fun reading this fantasy romance.

✨ The heroine is a healer. As fun as it can be to read about warrior or assassin heroines who take on their enemies by the sword, it's also sometimes nice to read about people whose strength lies in their intelligence and their kindness. The heroine, Lara, first attracts the attention of the hero because of her steadfast attention to healing the wounded of both camps, including the enemy's. Everyone loves her-- but there's ample reason for it here, which keeps her from coming across as a Mary Sue. Plus, we constantly see her at work and it's such a delightful part of the world-building.

✨ The heroine is a compassionate warlord. Picture Khal Drogo, only without the cruel streak. That's Keir, the hero: warlord of a group of people who ride horses on the plains and have just come to an uneasy truce with Lara's people. I could say sooo many great things about Keir, not just that he's hot but also that he's noble and honorable and merciful and kind. Not a pushover by any means, but definitely a man who knows that blood is not always the answer, and that the best way to win the heart of a lady is to treat her with respect and patience. *heart eyes* I stan an honorable man!

✨ The court intrigue. Even though the world-building is light, there's still enough tension to keep the pages turning. Lara's half-brother, Xymund, sells her into what he thinks is slavery when he gives her to Keir, and a lot of the book is her slowly coming to trust Keir and his people and realizing that so much of what she believed about them was wrong (and vice-versa). There's also political machinations and assassination attempts, threatening not just Lara's life but also that uneasy peace.

✨ The romance. Look, it's slow-burn with some great relationship building with two likable characters who just want to find happiness while also not screwing over their respective people. If you've ever read Grace Draven's RADIANCE, you'll know what to expect: it's like a comedy of errors that makes light of the misunderstandings and cultural disconnects of two people from different worlds whose compassion and empathy end up uniting them over their differences.

✨ Excellent secondary characters. Whether it was Anna, the temperamental cook; Atira, the female warrior who secretly loves fantasy epics; Simus, the brave and intimidating warrior with the outrageous sense of fashion; Joden, the bard (who reminded me a lot of Jaskier from The Witcher, only with better luck with the ladies), or Warren, Lara's noble guardsman, there were so many people in here who added spice to the story and some genuinely entertaining interactions.

Was it cheesy at times? Yes, but that's part of the fun of a fantasy romance, and honestly, this had more depth to it than some of those dudebro fantasy "classics," so even if you don't think you like romance, I'd still recommend it to fantasy readers who enjoy a good character-driven story.