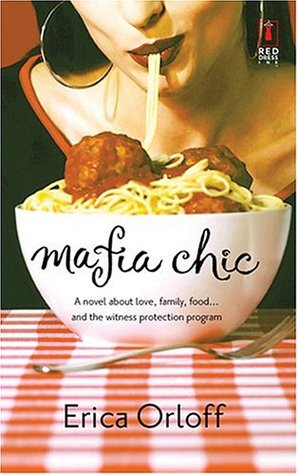 Mafia romances are pretty popular in the self-published section of the romance genre, but this is a traditionally published chick-lit from the early 2000s that touches upon the same subject. The heroine, Teddi, is the daughter of the Gallos and the Marcellos, two local mob families who dabble in felonies. She plays it straight and runs a restaurant but that doesn't mean that she doesn't know where all the bodies are buried (literally and figuratively). It really wreaks havoc with a gal's relationship status, if you know what I mean.

I actually thought this was a lot of fun. The first half of the book is a lot better than the rest, because the plot is basically a "will she/won't she?" love triangle conundrum between two guys: Robert, a TV personality; and Mark, the FBI agent who's investigating her family. While she tries to figure out what she wants, she's working out the kinks in her restaurant business, dodging mob hits, and trying not to explode after Sunday dinners with the fam.

Her friend Diana is probably my favorite character in this book and I liked her romance with Teddi's cousin Tony even better than the main couple(s). I also really liked her dad and grandfather, and how they played into virtually every Italian stereotype. This book was definitely inspired by the Sopranos and the Godfather, you can tell, but they're a lot more cuddly. I didn't think you could make a mob family cute, but this author did.

Apart from the pacing issues and the fact that I wasn't really that into either Mark or Robert as love interests, I thought this was a ton of fun. I've been wanting to read this for years because I really loved the cover and I'm happy to say that it's much more positive and non-offensive than some other chick-lit novels I have read from this era. It's a little "backwards" in some areas, but never verges into outright cringeworthy and offensive, unlike some others I could name. If you're looking for a quick pick-me-up and you really enjoy mafia romances, this would be a great read for you!