Under the Same Sky: A Memoir of Survival, Hope, and Faith by Joseph Kim 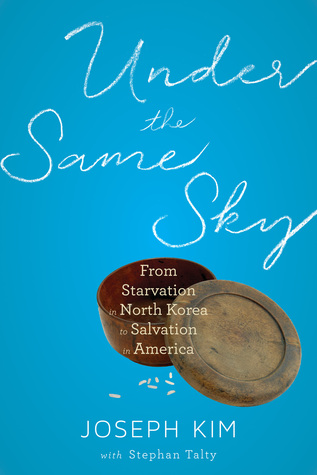 This showed up in one of the bags my friends and I have been exchanging with each other during quarantine, which turned out to be the perfect boon, because not only was it a perfect candidate for Pacific Islander/Asian Heritage month, I've also been on a bit of a North Korean-themed reading binge over the last month, starting with A KIM JONG-IL PRODUCTION, before segueing into THE GIRL WITH SEVEN NAMES, and finishing with A RIVER IN DARKNESS.

If there is a unifying theme to these books, it is that unless you are very, very close to the inner-circle, scrounging out a living in North Korea is difficult to varying degrees. Hyeonseo Lee was actually relatively privileged, coming from a high songbung (North Korea's politically-based caste system), but Masaji Ishikawa, being half-Japanese, had a much tougher time being an immigrant in a place that is taught to be suspicious-- even hostile-- to foreigners. By contrast, Joseph Kim started as lower-middle-class and was actually homeless and begging in the streets during the worst years of poverty in North Korea (after the collapse of the Soviet Union), on the verge of starvation and stealing from market stalls.

UNDER THE SKY is not an easy read because it's really sad. We follow Joseph Kim through all of his worst moments: the death of his father, the disappearance of his sister, being forced to steal and beg (including the theft of manhole covers to smash for the iron, which is technically punishable by the death penalty since it is theft of state property), punishment via detention center, and then the stress of escaping when you know that being caught means death. While reading, you kind of get this feeling of hopelessness: he didn't bother with school because grades mean nothing if you don't have connections and a high caste; he was so preoccupied with his own survival that the well-being of others sometimes came second, and he mentions his regret at not being more caring to his older sister. Joseph Kim did what he had to to survive, and I admired the bluntless of his recollections.

Interestingly, while in GIRL WITH SEVEN NAMES and RIVER IN DARKNESS, the defection played a significant role in the story, here it is so quick as to feel glossed over. His time in China was relatively seamless, and he was shortly flown to the States after learning Chinese. One in the United States, we get some closure about his happy life, and how he has made friends and even traveled to Europe, and is currently awaiting his college acceptance letters (5 years ago-- hopefully he got in). It feels like a rushed ending, especially with the slow and dramatic build of his North Korean life. I'm not sure if maybe that's because this was partially ghost-written and he chose to only share selections of his life story, because I see that a man named Stephan Talty is listed as a contributor, in which case I can understand why Kim might have wished to keep certain details of his life private. But it is worth noting that the beginning of this book is much stronger and more solid than the end.

Overall, I think this is a really great memoir and I think it's good to read multiple accounts of memoirs like these because you get to see what life in North Korea is like at multiple levels, from a variety of perspectives. As I've said in my reviews of previous books, we tend to get a pretty warped view of what North Korea is like living in the United States (case in point: Mango Mussolini's description of their leader as "Little Rocket Man"), and while it is not somewhere I would want to go to live or visit, reading these books does show a much more tempered view of a nation that is considered "hostile." I really enjoyed learning more about the culture, history, and people living there. I think that humanist view is necessary in politics, and it saddens me deeply that our current administration does not seem to share that view at all.