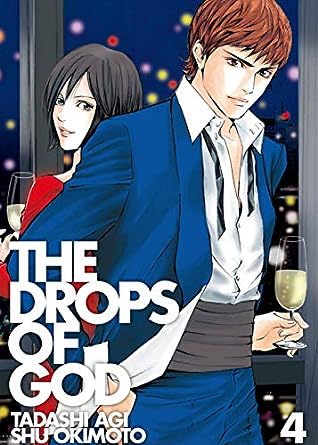 In today's "No, manga is not just for kids" rant, I want to squee over this series, Drops of God, some more. As a native Californian, wine is something that has always been there in the background. There are wineries all over California, and many people here are passably knowledgeable in all things wine because wine-tasting is such a part of the social scene. When I was in college, I used to say that I didn't like wine. And then I changed my mind and said that I only liked white wine. I got really angry at people who sneered at me and said, "Well, it's an acquired taste." Because that is the most annoying thing ever, having someone look down on you like a snobby snob. I know this, because I have people accusing me of this all the time with regard to my literary snobbery #sorrynotsorry.

Anyway, I eventually grew to love wine of all kinds, pink, white, and red-- shh, don't tell the snobs-- and even began to develop a pretty decent taste for it, to the point that I could recommend red wines to people who didn't think they liked red wines and actually have them enjoy it! (Or they were trying to shut me up and lied-- I prefer choice A, though.) Now wine is something that I enjoy all the time, and feel quite passionately about, because as this book says so lovingly, it isn't something you drink to get drunk. It's a social drink that's meant to be savored, chatted about, and enjoyed with others.

Drops of God is a manga that is basically a celebration of wine and wine tasting. The hero, Shizuku, is a young man who distanced himself from wine because his father was obsessed with it to the point of neglecting him emotionally, but now that wine has become a part of his father's will (he has to engage in a taste-off with the adopted son his father never told him about), he's gradually getting into wine and relearning all of the things his father tried to teach him in life. From that first point of contact, Drops of God is a rush of contests, rivalries, discourse, and knowledge-- all about wine!

Part of what makes this book SOO GOOD is that all of the characters are likable and it subverts a lot of the tropes in manga. For example, the "villain," Issei, isn't the usual cruel and taunting hero. He's arrogant and cocky, but he's also fair. (Also, I find him super attractive, soooo.) Miyabi, the heroine, is drawn like your typical shounen/seinen love interest, but she's REALLY smart and the book doesn't sexualize her all that much (bar the occasional fan service drawing-- but they're all tasteful). Other characters pop up, and the book always ends up making them really surprising, which I love.

This book is FINALLY about the French vs. Italian wine blind tasting that one of Shizuku's coworkers has insisted on. The outcome will determine whether the wine branch of Shizuku's beer company decides to import French or Italian wines, with wines in the Y1000, Y2000, and Y3000 price range (so roughly $10, $20, and $30), which are pretty decent margins for good wine. As usual, there's some unexpected challenges and developments that arise, and the book ends with another teased challenge, in this case, Shizuku finally tackling the riddle of his father's will.

I wish this was a drama on Netflix! I feel like the hero has the same sort of rambling poetic genius that made House M.D. a popular show, but this is a lot better because the hero is nice. All of the characters are so interesting and the wine tidbits seem to be accurate, based on what I know! I think anyone who loves wine and manga will LOVE Drops of God, and even if you just love one or the other, you'll probably still love this as long as you don't find the idea of wine mania boring.

Unfortunately for me, it looks like only about 25% of this series was translated into English and made available on Kindle, which makes me want to scream. GUYS. You need to read this and help me make it more popular so I can find out how it ends.