Alpha Girls: The Women Upstarts Who Took on Silicon Valley's Male Culture and Made the Deals of a Lifetime by Julian Guthrie 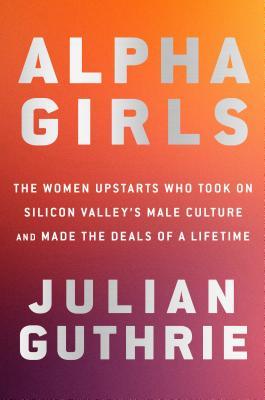 This is a tough review to write because I did like the beginning of the book. I just felt like it was too long and the subject matter was a little too... uninteresting. Part of that is also on me because I misunderstood what the book was about. The subheading-- "the women upstarts who took on Silicon Valley's male culture and made the deals of a lifetime"-- made me think it was going to be about women in tech, engineers and creators and CEOs who ended up in Fortune 500 companies. But no. This book is about four venture capitalists who are women who ended up making bank by investing in said Fortune 500 companies at the right time and place, which is slightly less impressive, imo.

With rich people, I think there is a temptation to paint their stories as a sort of "rags to riches" fairytale that seems easy because we want it to be easy, because most of us think that we would like to be rich. The problem is that even if you have the skills and the know-how, you aren't going to be rich if you don't also have luck (and privilege). The women in this book-- Magdalena Yesil, Mary Jane Hanna, Theresia Gouw, and Sonja Hoel-- had luck, and some of them had privilege, even though a lot of them started out in lower middle income situations; they were in families who mostly supported their endeavors and provided them with the right schooling and intellectual tools to get to the positions that they currently hold.

There is nothing wrong with having privilege, but it is important to acknowledge it, and understand that success often walks hand in hand with privilege, and that going to the right schools and learning the right things and meeting the right people are integral aspects of success. Likewise, even though this book is painted as a "girl power!" effort, most of the women in this book don't seem to identify as feminists and some of them even seemed almost anti-feminist. (There was one woman mentioned in here, a CEO, I think (not one of the 4 VCs), who said that she didn't speak at women-only conferences, like that was something to pat herself on the back over or that women-only conferences were somehow lesser. That kind of stuck in my craw a bit. I also didn't really like how, in order to be successful, most of these women seemed to feel the need to dress and act in a masculine way. I get why they felt the need to do that, but at the same time it wasn't a very empowering message. It kind of gives off a "it's a man's world, baby, and you either gotta play the game or go home" vibe. Ugh.

My favorite part of the book was about these women's unique upbringings, and how they got into the business world. However it quickly became cyclical and repetitive. There are only so many permutations of "and then they closed the deal and made tons of money!" one can stand before one starts to feel kind of bored. I've had this similar complaint about a couple of other nonfiction books I've read recently where the concept was interesting, but not enough to merit an entire book, and it started to feel like a very padded out Forbes or Bloomberg article.

I think that unless you're a high up in a tech company or an aspiring venture capitalist, this book probably won't be for you. I work in the tech world and was looking for something affirmative, and this book really wasn't it.