The Amazing World of Gumball Vol. 1 by Frank Gibson 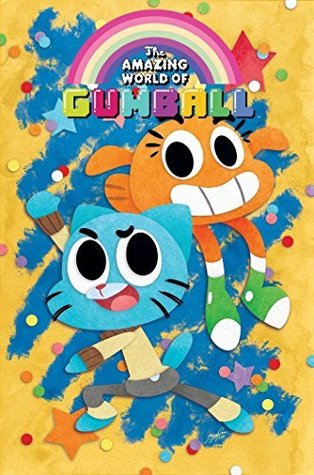 I had honestly never heard of The Amazing World of Gumball before because I don't get Cartoon Network, so I didn't realize this was based off a television show until I Googled the graphic novel. It's a pretty bizarre story about a cat boy with a bunny sister whose mom is a cat and whose dad is a bunny. His best friend is a fish boy, and they have a giant T-rex, a ghost, a paper doll, and some various food items as their best friends in school.

Story-wise, it reminds me a lot of Spongebob, with the cast of bizarre characters and anthropomorphized animals and objects, as well as the blend of toilet humor and adult jokes. I thought the characters were all really cute (Tina the T-rex is my favorite), and most of the stories were actually pretty funny and had a definite "Saturday Morning Cartoons" vibe, which I loved. Not all comic books are able to keep up the vibe and pacing of a TV show, but this one succeeded pretty well.

I'm giving it three stars because it was entertaining and I enjoyed trying it out on a lark, but I think it's too young for me and I didn't like reading it enough that I'd want to continue with the series. Anyone who enjoys children's TV shows like Spongebob and the like will probably really like this, though. I'm glad I gave it a try.