A Fucked Up Life in Books by Anonymous 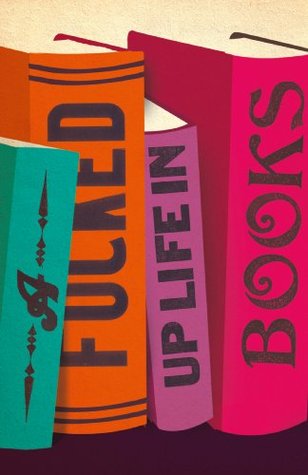 People often ask me, "How can you read so much?" And my thought is often, "How can't you?" As long as I could string words together, I've had a book in my hand (and maybe even before that; I used to try to eat them). I'm the type of person who carries not one, but two books in my purse, because there's a very real danger that I might finish one and then have nothing left to read. Books have accompanied me on virtually every turning point in my life: crates of books that came with me to college, where I binged on chick-lit and paranormal romances to distract me from my studies; books that were given to me by various exes; books that accompanied me abroad or to job interviews; books that I read underneath the covers with a flashlight as a child. For as long as I've been who I am, there's been a book lurking in the background.

A F***ED UP LIFE IN BOOKS has been on my to-read list for years, but I never got around to purchasing it until recently when it appeared on sale in the Kindle store for a very affordable $1.99. I was really excited to read it, as much for the positive reviews as the negative ones. The positive reviews were all saying how wickedly funny and relatable it was, while the negative reviews seemed to be coming from pearl-clutchers who disapproved of the bad language and thought the narrator was too raunchy. To any author who believes that negative reviews deter purchases, I give you this gleeful spite purchase.

And you know what? I liked it. I actually liked it a lot more than I thought I would. I figured, based on the sample I read, that it would be a series of short, anecdotal paragraphs. Nothing too fancy or elaborate. But this was actually a very nice collection of essays-- yes, filled with cursing, but also some very relatable sentiments to anyone who is a book addict like me. Honestly, the moment she won me over was when she started talking about Flight of Dragons, which is one of my favorite childhood movies that isn't Disney, and nobody I know seems to have heard of it. It's also based on a book (which she doesn't name, here, but it's got a different title from the film-- it's called THE DRAGON AND THE GEORGE, and it isn't half as good as the movie). The whole book was like that, keen observations and title drops that made me sit up and say, "BUT ME, AS WELL!"

People have the idea that people who love books are a well-behaved, quiet lot that are prim and decorous and schoolmarmish. Which isn't true. Books belong to anyone who cares to claim them, and I liked that the author was so different from the stereotypes that many people try to slap on those consider "bookish" (which is maybe why so many people were so shocked by this book). The fun, rambling tone reminded me a lot of Louise Rennison writing as Georgia Nicholson, only this was a Georgia that loved reading books (real Georgia was somewhat anti-intellectual) and tied her love of reading to all of her madcap, risque adventures.

Basically, I loved it.