Console Wars: Sega, Nintendo, and the Battle that Defined a Generation by Blake J. Harris 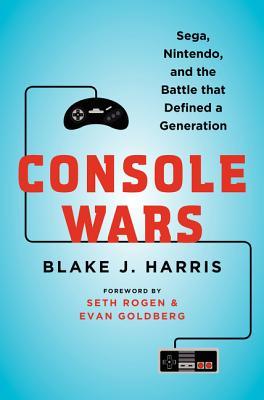 I don't always agree with the negative reviews of a book, but in this instance, I feel like they all hit the mark. CONSOLE WARS basically seems to be 500 pages of hero worship written in honor of the President of Sega, Tom Kalinske. And this would be fine, if it weren't for the almost fictional style narrative that feels free to color its perspective as heavily as a toddler holding one of those thick, jumbo markers. Good journalism means a light touch, using fact to bring your readers to the conclusion you want instead of pummeling them over the head with nostalgic bathos.

I'll admit that part of this review stems from my own biases. I grew up with Nintendo and I never liked the Sega game systems, so it was irritating to see Nintendo being demonized as the evilest game company that ever eviled with Sega being portrayed as some kind of heroic underdog, particularly with the rather irritating passages making fun of Sega Japan, portraying them as being the goofy henchman who's threatening the divine plans.

While reading this, I kept being reminded of something-- and then it hit me: READY PLAYER ONE. This was basically an excuse to get on a soapbox, like READY PLAYER ONE, and proclaim to all who will listen why Sega was the best childhood toy and why. READY PLAYER ONE did that with Atari Games and John Hughes movies, and basically anything else that pertained to white, young, male, 80s geek culture, and there's nothing wrong with that, but between the hackneyed dialogue and the endless diatribes, I do feel like this comes across as a questionable journalistic effort at best.

For a better look at nostalgic toys, I'd recommend the documentary The Toys That Made Us. Harris would credit Kalinske single-handedly with the creation of He-Man, but there were at least two other major players in that effort (and even the Wikipedia article only mentions him once, towards the end), which leads me to think that Kalinske probably wasn't the Toy Superhero this book is making him out to be and that many of his other single-handed achievements were actually team efforts.