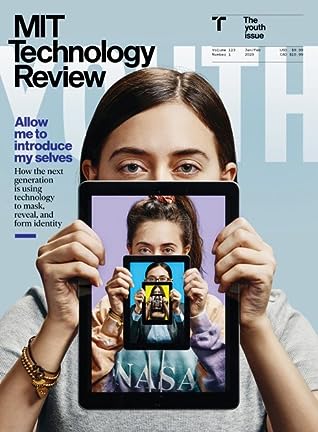 I loved JADE CITY, so obvs when I saw this short story freebie (available at MIT Technology Review), I was like, "Hmm, let me think: YAAAAAASS." I don't actually have a Reddit account, but I'm a champion lurker and I follow at least three of those YouTube accounts who just read annoying Reddit posts in funny voices, so I'm not going to pretend I'm not trash (because I totally am). It's pure guilty-pleasure reading, and one of my favorites is AITA.

In I(28M)CaDGaNMPTWGM, the unnamed, unsung hero is a millennial struggling with the typical millennial problems: not wanting to waste valuable time in an annoying relationship when there's so much else to be done! So he signs up with this website that's basically a dating sim only with deepfakes, and instead of using one of the stock image templates, he uploads the face of one of his close online friends-- but don't worry, it's okay because she's a lesbian! (You know this would totally be the logic of some AITA asshole out there.)

I guess in this site, which is called Worthy, you can "graduate" to dating real people once you gain enough Not A Douchebag Points (no, that's not the real name). But our hero doesn't like the idea of real women, when the fake version he's created his so comfortable. It reminds me of this video I watched with this guy whose girlfriend was a lifelike doll, who referred to real women condescendingly as "organics." This guy could be his cousin. Anyway, things are going well, and his parents are finally off his back-- only they're not. They want him to get married. To the deepfake.

I thought this was hilarious because Fonda Lee totally captures the oblivious, sanctimonious tone of one of those people who are so convinced they are in the right, even though what they are doing is actually problematic. And maybe I'm problematic too because the idea of a website that handholds you through the dating process before taking off the training wheels and dropping you in the dating pool for realsies actually seemed like a good idea (but I've had pretttty bad luck with online-- there are a lot of people out there who need to be taught how not to be assholes; I see you guy who didn't offer to pay for my mineral water on our coffee date and then went on a rant about how we're a post-sexism society while I'm sitting there like the physical embodiment of the -___- emoticon, and guy who accused me of secretly being a forty-year-old using a fake photo of a college student because there was no way I could be my actual age).

Basically, this story is the bomb and I definitely recommend it. The tone, the world-building, the hilariously out of touch character-- they're all 100. And it's freeeee.