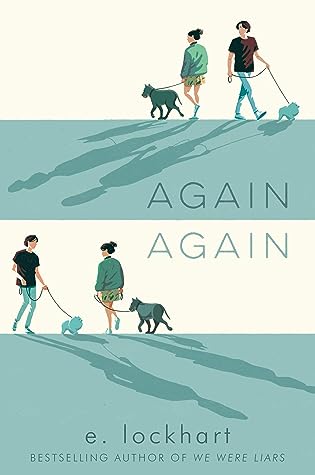 I have a new policy where if a book doesn't grab me within the first 30-40 pages, I no longer finish the book unless I absolutely have to. I feel like if a book fails to grab you from the beginning, or at least make you think it will, that is a shortcoming great enough that it warrants a review.

AGAIN AGAIN was a book I was excited about ever since I first heard about it because I've been a fan of Lockhart since high school (don't ask how long ago that was) with her Ruby Oliver series, which was much edgier than a lot of the offerings that were being promoted to me and my fellow kiddos at the time.

With books like WE WERE LIARS and GENUINE FRAUD, she seemed to get edgier, and trying to capitalize on the growing trend of Gillian Flynn-esque mysteries among the 13-18 set. A lot of my friends didn't like WE WERE LIARS, but I actually really enjoyed it-- far more than Ruby Oliver, even. I love unreliable narrators and I liked the fact that there were no easy answers or flawless characters in the book.

AGAIN AGAIN isn't like Lockhart's earlier or later stuff, so if I am to give kudos for one thing, it's that this is an author who constantly seems to be evolving and trying new things. She doesn't stagnate. Which is a check when it comes to creative progress, but kind of hard for us readers, who will never really be 100% certain whether one of her books will be for us-- they're all so different.

The premise is that there are two(?) timelines in this book, and I guess we get to see how the heroine, Adelaide, makes different decisions that change the progress of each world? It's not science-fiction so much as a speculative young adult work with some mild supernatural events fueling the plot, kind of like how BEFORE I FALL did the same thing with life after death-- only this heroine isn't dead. I thought the premise was interesting, but I couldn't easily tell the difference between the two timelines which made reading confusing,

I was also really not a fan of the writing style. This had a pretentious, forcibly artistic "Maggie Stiefvater vibe" to it that I really did not like at all. The heroine likes poetry and some parts are in verse and it just feels way too affected and pretentious, and I did not enjoy it at all. Some might, particularly if you enjoy Maggie Stiefvater, but I hate that author's work and steer clear of it at all costs, so seeing one of my faves start writing in that kind of style felt like a betrayal.

Your mileage may vary, of course. But I know what I like and don't like in fiction, and it seemed pointless to force myself through this book as soon as it became clear that it wouldn't be something I enjoyed. I think if you enjoyed her newer books because of their edge, you should avoid this one, because it has none. It feels like a YA that is being targeted at a much younger audience.