One to Watch by Kate Stayman-London 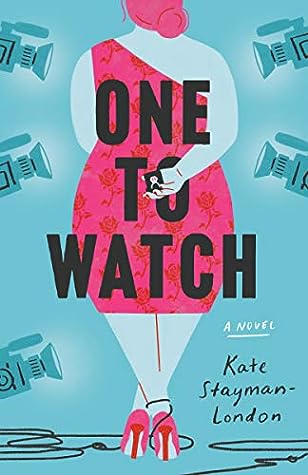 ONE TO WATCH is a book that perfectly captures all of the cringe of reality television, while also providing a pitch-perfect look at the behind-the-scenes manipulation of the reality TV industry, the way people view women's bodies, and what it means to be an empowered woman in a society filled with double-standards. This could have been a heinous, horrible book in the wrong hands, but in Stayman-London's hands, it became a new fave.

✨ Body positivity. I feel like this book really does a great job with its heroine, plus-sized fashion blogger, Bea. She's just an ordinary woman who happens to wear a size 20, which is a pretty typical size for a lot of American women, although a lot of us think of that as unusual because we don't see women with bodies like that in TV or magazines. When Bea is called to be on the very show she criticized on her blog, people treat it like she's breaking a very controversial barrier, even though those barriers should not exist. The body positivity movement has its flaws but I feel like those are addressed here: there's a HUGE difference between living a healthy lifestyle and judging others for the way they look.

✨ The rep. In addition to Bea, who is plus-size, there is a lot of diversity in the guys she's supposed to date (which she demanded on her show). One of the love interests is Asian, one of the love interests is black. There is a character in here who is gender-nonconforming and a character in here who is asexual. One of the (male) love interests is a virgin, and it's treated so respectfully, which I definitely felt like was a call out to how The Bachelor and all of the promo handled Colton, where everyone made SUCH A BIG DEAL OVER IT, whereas here it feels totally normal.

✨ The portrayal of social media and reality television. I loved all of the multi-POVs in here, which I usually can't stand. But the blog posts, the Tweets, the comments, the podcasts, and the mailing groups were just spot-on with how people talk. I felt like the blog posts were a really great portrayal of how people really do consume and write about media. The comments and Tweets about Bea are (sadly) an accurate reflection of how people talk to and about women with a prominent online presence, especially if those women aren't considered conventionally attractive.

✨ The romance. OH MY GOD, so usually in reality TV about dating there's just a whole bunch of jerks and all the good guys get voted off immediately, which is why I find watching them so frustrating (you get invested, you know?), but here, there are a number of good guys that I loved. (And also a ton of guys that I loved to hate, and hated to love.) I'm so picky about chick-lit, and haven't enjoyed a book THIS MUCH since the heyday of Meg Cabot and Plum Sykes and Jennifer Weiner circa the late 90s and early 2000s. This was SO MUCH FUN and I was obsessed with Bea's journey not just to find love, but also to find happiness and to love herself.

✨ The feminist themes. Honestly?? So good. Bea was the perfect blend of vulnerability and empowerment. She wasn't portrayed like an icon. A lot of her insecurities were things that I, as a plus-size woman, really related to. She made mistakes and could be irrational and selfish, but I could see myself making and doing a lot of her decisions and having those same doubts. But despite all that, there was an overarching message that women shouldn't have to settle for less, and they shouldn't have to apologize for being the way they are. I loved that about this book; it kept it from feeling exploitative, because it had the heart, and didn't portray this as a throwaway thing.

✨ The hate-watching cringe. ONE TO WATCH is seriously just like watching a television show, and I hope there are spin-offs because I WOULD TOTALLY READ MORE OF THIS WORLD. I found myself rooting for various love interests, and wanting to scream at the book when drama surfaced, especially the love-hate relationship between Bea and the director of the show (omg, Lauren, like, CAN YOU NOT). I don't think I've ever read a book that captures the vibe of reality TV this well, only it's better than any reality TV show that I've seen in like ten years, so.

I found myself at a crucial point about 370 pages in where I knew it was a make-or-break moment, which would determine whether this book was four or five stars for me. The book didn't choose the ending I wanted though-- it one-upped me and found an even better one. I honestly hope that this becomes a movie, because if it doesn't... PEOPLE ARE MISSING OUT. This is the best chick-lit book that I have read in years, and I honestly couldn't put it down once I really started reading.